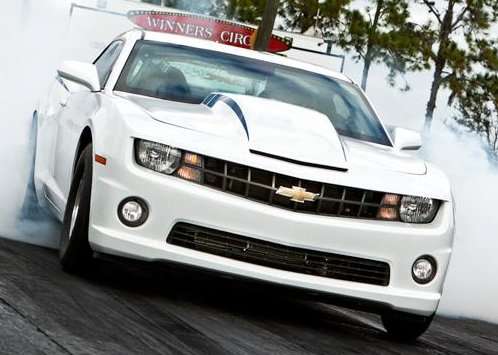 General Motors used the day before the 2011 SEMA Show in Las Vegas to unveil the COPO Camaro Drag Car Concept and today – the General has confirmed that production will be a reality but only 69 examples of the track only high performance Camaro will be built to pay homage to the 1969 COPO Camaro that inspired these modern drag cars.
Advertisement

The 2012 Chevrolet COPO Camaro drag package is expected to be the quickest factory built Camaro ever, with this limited run of 69 high performance Camaro coupes intended to run in the NHRA Stock Eliminator and Super Stock classes.

"The COPO Camaro is going to shake up the sportsman drag racing ranks this summer and give Chevy fans a great new reason to cheer on the Bowtie," said Jim Campbell, GM U.S. vice president of Performance Vehicles & Motorsports. "COPO builds off the strengths that have made the Camaro the best-selling sports car in America. And while it was developed strictly for the drag strip, the COPO Camaro is infused with the same performance pedigree that every Camaro shares."

When a customer is ordering their 2012 Chevrolet COPO Camaro drag package, they can pick between three different engines, each of which will be mated to a PowerGlide automatic transmission built for race duty. There were initially two engines to be offered in the new COPO Camaro, a naturally aspirated 427 cubic inch LS7 engine for AA Stock class and a 327 cubic inch LSX topped by a 4.0L supercharged for the A Stock class. However, looking to cater to more races, the production version of the COPO Camaro includes those first two engines and another LSX 327 with this one topped with a 2.9L supercharger for access to B Stock racing. Output figures for the three engines have not been announced but the power is channeled to the drag racing slick tires via a solid rear axle.

The 2012 Chevrolet COPO Camaro is available in Flat Black, Summit White, Victory Red, Silver Ice Metallic or Ashen Gray Metallic with a graphics package that will make the COPO Camaro look similar to the white and blue concept that debuted in Vegas and has shown up at a variety of auto shows around the country. Those graphics are available in Metallic White, Semi-Gloss Black, Inferno Orange Metallic and Chevy Racing Blue – offering a variety of color matching options for the lucky 69 buyers of the 2012 COPO Camaro. Each COPO Camaro will receive a sequenced build number to ensure their future collectability but since these Camaro coupes are not street legal, they will not include a Vehicle Identification Number.

The starting price for the 2012 Chevrolet COPO is stated as being $89,000, but GM hasn’t gone into any detail whether that includes your choice of engines or if each engine option will carry its own price. One interesting option that surely isn’t included in the $89k price tag as a special package that presents the new COPO Camaro owner with not one – but all three of the race ready engines – all of which will be stamped with the matching serial number. This package would be ideal for someone who wants to be able to play around with the different NHRA Stock classes, as well as creating one incredible collectors piece for the future. Imagine being able to buy a classic COPO Camaro with three engines, all of which have matching numbers.

General Motors has also explained that an independent third party was hired to select the first buyers of the 2012 Chevy COPO Camaro. Those individuals picked will be notified via a confirmation letter with directions of how to complete and pay for their new purpose built drag racing Camaro. There is also no indication as to how many of the 69 2012 COPO Camaro coupes are spoken for so if you want your chance to put a new COPO Camaro in your garage; you had better head to your local Chevy dealership in a hurry. You should probably also have your checkbook in hand – ready to reserve your historic Camaro race car.

For Chevrolet and Camaro fans, the Frank Sinatra's voice should be ringing out...."back in 2012...it was a very good year". First the ZL1 and now the COPO...GM is really showing off their American muscle this year.

Check out our gallery on the above by clicking any of the thumbnails for a look at the COPO Camaro at the debut in Vegas!