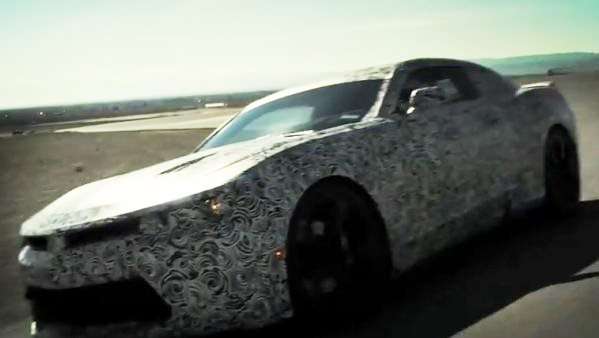 Although the Ford Mustang has beaten the Chevrolet Camaro in the first few months of 2015, General Motors expects to reach the 500,000 units sold plateau with the 5th gen Camaro this month and they are celebrating by showing off the 2016 Camaro in action on the track.
Advertisement

Since the Chevrolet Camaro was introduced for the 2010 model year late in 2009, it has outsold the Ford Mustang in every full calendar year. While the Mustang won a month here and there over the past 5 years, the Camaro has posted 5 straight annual performance car sales title wins with at least 80,000 cars sold in each of the full calendar years. Also, when the Camaro was introduced in August of 2009, GM sold 61,648 Camaros by the end of that year – that is 61,648 units sold in five months.

These strong sales over the past 67 months have allowed the Camaro to claim 5 straight sales titles over the Ford Mustang, but the strong reception for the 5th generation Camaro has also allowed the newest GM muscle car to approach a very big sales plateau. In March of 2015, General Motors expects to sell the 500,000th 5th gen Camaro, which is far more units sold of any other performance car in America in the last six years.

Celebratory Camaro Video
To celebrate the half million units sold, General Motors put together a video showing a 2015 Chevrolet Camaro Z28 taking to an unspecified road course for some high performance action. The video begins with the bright red Camaro Z28 revving the engine in a trackside garage and as the 505hp Camaro storms around the track, we are treated with the roar of the LS7 V8 with a steady stream of bragging rights sprawled across the screen.

The 2015 Camaro Z28 is arguably the baddest of the 5th gen lineup, so it is fitting that a video celebrating a half million units sold features the best of the best. It is a great video of the Z28 and if you enjoy watching and listening to American muscle cars doing their thing, this is a video that you will enjoy.

However, what really caught my eye was the very end of the video. Around the 45 second mark, the 2015 Camaro Z28 does a few smoky donuts and seemingly shuts down amidst a cloud of smoke. Through the smoke, we hear a car start up and it clearly sounds different from the Z28…because it is the 6th generation Camaro.

The First Official Look at the 6th Gen Camaro
General Motors has made it very clear that 2015 will be the final model year for the 5th gen Chevrolet Camaro, but the automaker hasn’t been particularly forthcoming with details on the 6th gen Camaro. We have seen some shadowy images in background videos at the recent auto shows, but this video from GM is the first good look we have gotten from the company.

As you can see in the video below, the 6th gen Camaro in action on the track is covered in camo, so it really isn’t anything that we haven’t seen in spy shots and YouTube videos in the past. However, this formal acknowledgement and official showing of the camouflaged 2016 Camaro is a clear sign that we are getting close to the debut of the next generation muscle car. While seeing the new car is fun, the key point here is that with the automaker releasing this video, we are one step closer to the car being introduced in the flesh with full details.

In the meantime, congratulations to General Motors on the Camaro reaching a half million units sold. Crank up your speakers and enjoy this Camaro video, showing the 5th gen Z28 and the 6th gen test car.