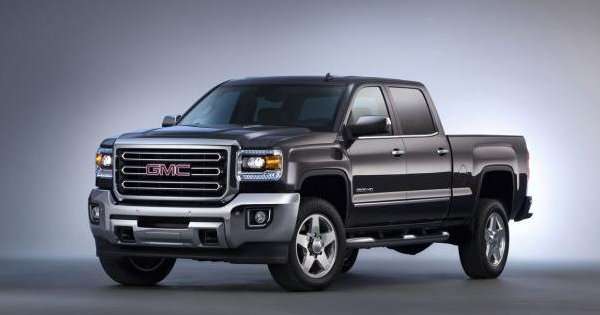 General Motors has just pulled the wraps off of the 2015 Chevrolet Silverado HD and the 2015 GMC Sierra HD in 2500 and 3500 trim – all of which sport a new look and new capabilities.
Advertisement

First and foremost, the 2015 Chevrolet Silverado HD and 2015 GMC Sierra HD 2500 and 3500 all receive the same substantial facelifts as the half ton brethren of these new heavy haulers. Aside from the obvious fact that the 2500 and 3500 versions of the new Silverado and Sierra are quite a bit larger than the 1500 versions, the heavy duty Chevrolet and GMC pickups look very similar to the light duty models that were introduced earlier this year. Within each of the brands, the 1500, 2500 and 3500 share a very similar “face” with the Silverado relying on a stacked headlight design while the Sierra HD calls upon a similar projection designed accompanied by a row of LEDs for a high end, high tech look. The biggest difference is that the heavy duty versions of the revamped Chevy and GMC trucks is a larger grille on each of the two trucks to allow for better engine cooling under the rigors of heavy duty truck work.
"It is one thing to generate big power numbers in cool weather, and quite another to maintain power and torque when towing up a long grade on a blistering summer day," said Luke. "We think customers will appreciate all of the work that went into the cooling for the new Silverado HD when they get a chance to really put it to the test."

Curiously, the 2015 Chevrolet Silverado HD and GMC Sierra HD rely on the same engine lineup as the current heavy duty GM trucks. I expected that the redesigned General Motors heavy duty trucks would have gotten at least a small bump in power for the 2015 model year but perhaps the company wants to focus their marketing attention on the interior and exterior redesign and they will keep a powertrain lineup upgrade for a future model year – perhaps 2016. The most significant news on the 2015 Chevrolet Silverado HD and GMC Sierra HD is that while both trucks didn’t get any more power, they are both more powerful. The 2015 GM heavy duty trucks now offer a maximum available payload of 7,374 – this is up from 7,222 and this new figure is the best among any of the current heavy duty trucks on the market. The maximum available towing capacity when using a 5th wheel attachment is 23,200 pounds, up from 22,500 in the current trucks and while this puts the 2015 GMC and Chevrolet HD trucks behind the competition from Ford and Ram, the new GM trucks do claim the title of having the highest towing capacity when using the conventional hitch mounted under the rear bumper. With 19,600 pounds of towing capability, the 2015 Silverado HD and Sierra HD are 1,600 pounds better than the current GM trucks while also being better than anything offered by the competition.

While General Motors opted not to add any more power to their 2015 heavy duty Chevy and GMC trucks, alterations in other portions of the truck have made them the best in class in terms of payload and conventional towing. With the current head to head to head battle between GM, Ford and Ram, you would expect that the new GM trucks would be introduced with the best of everything but perhaps a new best in class 5th wheel towing number will surface if (or when) some new, more powerful engines are introduced. Considering that Ford is currently working on a new 6.7L PowerStroke with more power and the Ram Cummins Turbo Diesel already offers almost 100lb-ft more torque than the Duramax, I would expect more engine news from GM within the next year or so. In the meantime, the 2015 GM heavy duty trucks offer a new exterior and a refined interior that should help improve sales of Chevrolet and GMC’s biggest non-commercial pickups.