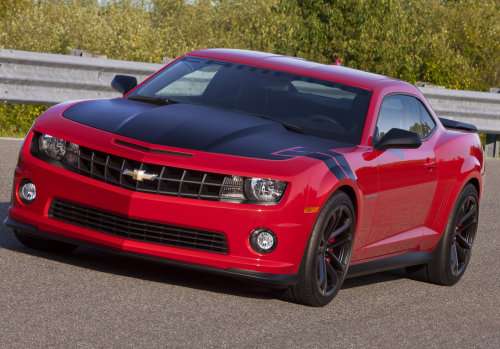 Some may be questioning how I can say that the 2013 Chevrolet Camaro 1LE is “just” $37,035 but when you consider the level of engineering and the targeted competition of the new 1LE package – this new Camaro could be quite a bargain. The 2013 Camaro 1LE is a handling package applied to the Camaro SS and General Motors designed this new muscle car to compete with the Ford Mustang Boss 302. The 2013 Mustang Boss 302 carries a starting price of $42,995 (including destination) while the more serious and more limited edition Boss 302 Laguna Seca starts at $49,990. Oppenheiser expects that the handling improvements made to the 2013 Camaro 1LE will allow it to compete better with the higher end Mustang Boss 302 Laguna Seca and if that is true – the Camaro will do so with a discount of over $12,800. Even if the 2013 Camaro 1LE only keeps up with the standard Boss 302, it is still $5,960 so there is no denying that the new 1LE is a bargain buy for those looking for a great-handling American muscle car.

The 2013 Camaro 1LE has all of the goodies of the Camaro SS, including the 426 horsepower 6.2L V8 and a close ratio 6-speed manual transmission but it has been improved upon by adding a 3.91 rear gear ratio, a vastly improved suspension setup and lightweight wheels wrapped in high performance tires. The 2013 Ford Mustang Boss 302 also includes a high tech suspension system, lightweight wheels with high performance tires and a 6-speed manual transmission but unlike the standard Mustang GT that makes 420 horsepower – the 2013 Boss 302 Mustang offers 444 horsepower. This gives the lighter Mustang an advantage in power and that could be a key component in the head to head battle between the Boss 302 and the Camaro 1LE. On the other hand…the Camaro packs 420lb-ft of torque to the Boss 302 Mustang’s 380.

However, if you are looking to do some road racing in an American muscle car on a limited budget – the 2013 Chevrolet Camaro 1LE proposes a pretty substantial advantage in terms of price.

More importantly, the 2013 Camaro ZL1 Convertible starts $450 more than the 2013 Ford Mustang GT500 Convertible which happens to offer a significantly higher amount of power than the topless Camaro in terms of both horsepower and torque. General Motors makes up for that difference in power with their high tech Magnetic Ride Control system but when it comes down to the price – Ford has a slight advantage in the battle of the ultra high performance convertible muscle cars.

The Chevrolet Camaro holds a slim lead in sales through 2012 over the Ford Mustang as GM attempts to claim the title of being the bestselling muscle car in America but Ford has had strong back to back months. If Ford keeps up this pace, they could catch Chevrolet before summer is over but with the Camaro 1LE offering a discount over the Boss 302 Mustang – it will be interesting to see how sales of these two American heavy hitters continue throughout the 2012 calendar year.