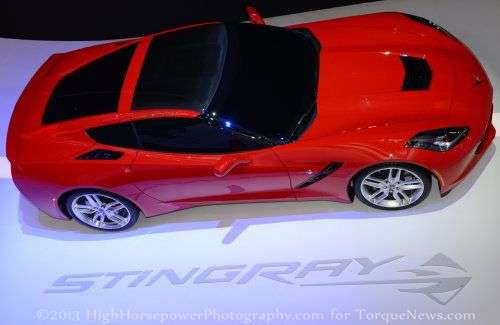 General Motors announced the 2014 Chevrolet Corvette Stingray prices this morning with the coupe starting at $51,995 and the new Convertible starting at $56,995 – both of which are only about two thousand dollars more than the outgoing 2013 model year Corvette.
Advertisement

We have been speculating since the debut of the 2014 Chevrolet Corvette Stingray back in January just how much it would cost to own one of these gorgeous new American supercars and with today’s announcement – the price increase between the 2013 and 2014 Corvette is actually a bit lower than we expected. GM hasn’t rolled out full pricing (via a configurator website) just yet but the company has given us a good look at roughly how much it will cost to put the new C7 Vette in your driveway.

The 2014 Chevrolet Corvette Stingray Coupe comes with a starting price of $51,000 plus a destination fee of $995 for an out-the-door starting price of $51,995. That price is $1,400 more than the base price of the 2013 Corvette Coupe which starts at $49,600 and requires the same $995 destination fee for a total price of $50,595. This based price for the 2014 Corvette Stingray Coupe includes the 450 horsepower LT1 V8, the new 7-speed manual transmission with Active Rev Matching, a five position Drive Mode Selector, a removable carbon fiber roof panel, HID and LED lighting all around, twin 8 inch configurable infotainment screens featuring Chevrolet MyLink, a Bose 9 speaker audio system and the lightweight magnesium-framed Grand Touring seat – just to name a few.

“The 2014 Corvette Stingray perfectly embodies Chevrolet’s mission to deliver more than expected for our customers,” said Chris Perry, vice president, Chevrolet marketing. “The Corvette Stingray delivers a combination of performance, design and technology that very few manufacturers can match, and none can even come close for $52,000.”

For those who want more open air freedom out of their American supercar, the 2014 Chevrolet Corvette Stingray Convertible comes with a starting price of $56,995 which includes the mandatory $995 destination fee. Compared to the 2013 Corvette Convertible which starts at $55,595, the 2014 Stingray Vert is also only $1,400 more than the outgoing model. The new C7 Convertible comes with many of the same standard goodies as its hard topped counterpart with the major exception of the removable carbon fiber roof panel.

Some of you are likely wondering how much the price of the 2014 Chevrolet Corvette Stingray will jump when you begin adding options and from today’s statement, it looks like a loaded up 2014 Stingray will put you in the same range that we discussed back in March. A General Motors contest to give away a 2014 Corvette listed the value of the prize vehicle at $71,860 – a price which we speculated was based on a Corvette clad in all of the options (click here for more on that). It looks like we were right on the money with that speculation as GM explains that a fully loaded 2014 Corvette Stingray Coupe (similar to the bright red beauty that debuted in Detroit) will carry a price of $73,360. That price includes the 3LT interior package that adds leather throughout the cabin ($8,005), the Z51 Performance Package ($2,800), the Competition Sport Seats ($2,495), the exposed material carbon fiber roof panel ($1,995), Magnetic Ride Control with Performance Traction Management ($1,795), the dual mode exhaust system ($1,195), a carbon fiber interior trim package ($995), a suede upper interior trim package ($995), red painted brake calipers ($595) and black painted wheels ($495).

In addition to adding lots of premium Nappa leather on the seats, dash, doors and instrument panel, the top of the line $8,005 3LT interior package for the 2014 Corvette Stingray Coupe adds a Bose 10 speaker sound system, a color heads up display, navigation, satellite radio, and heated/cooled seating surfaces.

The $2,800 Z51 Performance Package for the C7 Stingray adds unique gear ratios, a transmission cooling system, 19 inch wheels in the front with 20 inch wheels out back, enlarged brake rotors, a brake cooling duct system, electronic limited slip differential, a differential cooling system, and unique chassis tuning. GM claims that the 2014 Corvette Coupe equipped with the Z51 package can provide over a full G of cornering force while dashing from 0-60 in under 4 seconds.

While the fully loaded price of $73,360 for a 2014 Chevrolet Corvette Stingray Coupe is a huge jump over the $51,000 base price, those who are worried about just plain going fast won’t need to invest anywhere near that much. In that long list of options above, only the Magnetic Ride Control, the Z51 Performance Package, the Competition Sport Seats and the dual mode exhaust system add go-fast fun to the new Corvette. If you factor in those options to the base Coupe price, you can have yourself one smokin’ fast 2014 Stingray $60,280.

While the pricing information for the 2014 Chevrolet Corvette Stingray Coupe is currently abridged, we can expect to see the new C7 pop up on the Chevrolet website in the coming months – at which point we will have a clear idea of just how much it will cost to build our dream 2014 Vette.