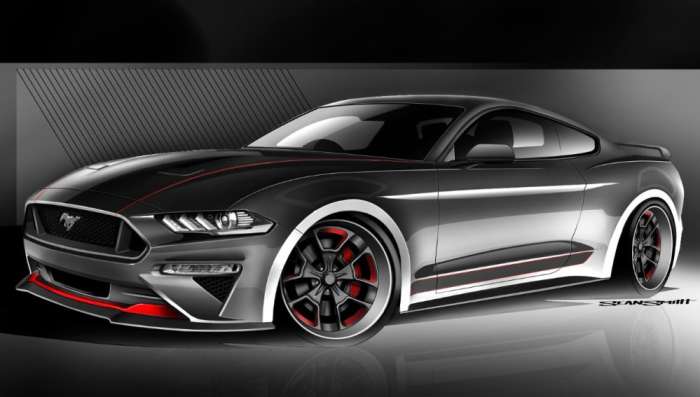 Ford Motor Company has claimed three of the four awards given out by the organizers of the SEMA Show in Las Vegas for 2018, with the F-Series, Mustang and Focus being the most popular model in the truck, car and sport compact segments.
Advertisement

Each year, the SEMA Show awards the “hottest” vehicles in the sprawling Vegas convention center and more often than not, Ford products grab more than one of those awards. When these awards were introduced almost a decade ago, SEMA awarded the most popular truck, car and SUV. The sport compact class was added a few years back in order to give the smaller cars a chance at the spotlight next to the muscle cars that have always dominated the SEMA car class. In 2017, the car class was split up into coupes and sedans, but for 2018, there are awards for the hottest car, truck, sport compact and SUV – with Ford claiming three of those four.

“We are honored that SEMA Show exhibitors have bestowed Ford with these prestigious awards,” said Hermann Salenbauch, global director, Ford Performance. “We make a point of embracing the aftermarket and appreciate this endorsement from the SEMA community as we strive to keep our best-selling nameplates among the most customized vehicles around the world.”

2018 SEMA Awards
First up, the Ford F-Series pickup – primarily the F-150, F-250 and F-350 – combined to take home the Hottest Truck of SEMA 2018. While there are plenty of Chevrolet and Ram trucks on display at the ongoing show, Ford was the most popular truck in attendance for the eighth time in the nine years of the award. 2014 was the only year where the F-Series did not win, with the Chevrolet Silverado taking the title that year.

Finally, the Ford Focus won the 2018 SEMA award for the Hottest Sport Compact. This class was called the Hottest Hatch in 2017, but the Focus won that as well. In fact, this is the fourth straight year in which the Focus has won the class of smaller-than-muscle-cars, with the Focus ST and RS playing a huge role in this current dominance.

“Ford vehicles serve as great platforms for personalization, evident by the three SEMA Awards announced today,” said Chris Kersting, SEMA President and CEO. “Regardless of whether drivers are choosing a car, truck or sport compact vehicle, they can be confident in knowing there’s a tremendous range of options for customization when they select a Ford vehicle.”

The Jeep Wrangler won the 2018 SEMA award for the Hottest SUV – an award that it has won every single year of the award program.