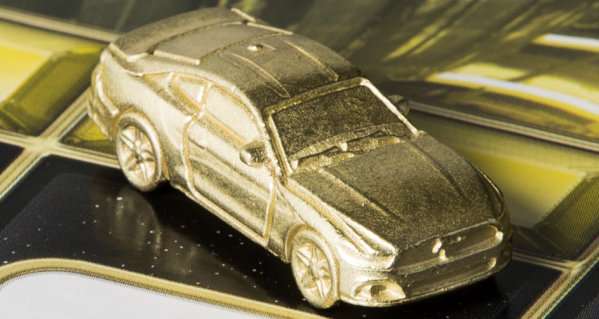 Ford Mustang fans who enjoy the game Monopoly Empire can now play the board game with a piece styled after the 2015 Mustang GT, effectively replacing the Chevrolet Corvette which previously came with the unique brand name board game.
Advertisement

The odds are good that if you are a car guy or car girl and you enjoy playing Monopoly, you are generally the car piece. As a car guy, I want to represent myself in the gaming world with a car, even if it is some oddball 1930s racecar – a car is still better than a thimble or a top hat or an old shoe. When Monopoly Empire introduced the Chevrolet Corvette piece a couple years back, car lovers finally had a more modern option for showing off their love of the automobile and starting now, Ford Mustang fans can use their favorite sports car when playing the famed board game.

On sale now, the newest release of Monopoly Empire includes the 2015 Ford Mustang GT rather than the C7 Chevrolet Corvette Stingray. While the original Monopoly game still has the old school race car, Mustang fans will be able to buy the Empire edition and use the bright gold Mustang when racing around the original game board as well.

Ford Mustang in Monopoly Empire
If you are not familiar with Monopoly Empire – here is a quick rundown of the game that now includes a 2015 Ford Mustang GT piece. The basic gameplay is similar to the original Monopoly that we all know and love, but rather than buying properties like Park Place, Boardwalk, Marvin’s Gardens, Baltic Avenue, Short Line or Kentucky Avenue, you buy famous brands like McDonald’s, Beats by Dre, Nerf, Fender, Samsung and many more. Also, rather than the original Monopoly game pieces like the old school race car, the thimble, the top hat and the battleship, the 2015 Ford Mustang is joined by an Xbox controller, a PUMA brand shoe, a Caterpillar excavator, a Transformers head and a Wilson Tennis Racquet.

The first generation of game pieces included the Corvette, a Coca-Cola Bottle, an Xbox controller, McDonald’s French fries, a Paramount Pictures clapper board and a Ducati motorcycle.

Other Monopoly Game Piece Options for Car Lovers
While the Chevrolet Corvette Stingray and the Ford Mustang are the only official modern Monopoly brand game pieces, Monopoly worked with the toy car maker Johnny Lightning back in the late 90s and early 2000s to make an entire line of Monopoly game pieces in the style of real vehicles. These 2-car packs included a normal 1/64th scale diecast car from Johnny Lightning with a unique Monopoly livery, along with a proper Monopoly-scale game piece of that same car.