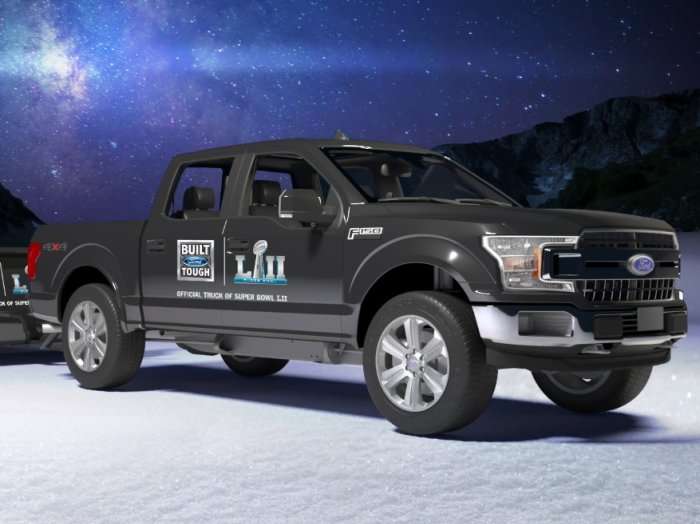 A pair of Ford F-150 pickups has spent all of this week offering 18-person sleigh rides around Minneapolis for the festivities leading up to Sunday’s Super Bowl LII between the New England Patriots and the Philadelphia Eagles – and the free rides around the city continue through Saturday.
Advertisement

The 2018 Ford F-150 is the official truck of Super Bowl LII so to showcase America’s best-selling half-ton truck, the Motor Company has been offering unique sleigh rides around Minneapolis to those folks who have arrived ahead of Sunday’s game. These F-150-pulled sleighs are helping fans get around the city while delivering them to the Super Bowl LIVE display at 8th Street and Marquette.

Ford Sleigh Rides
Due to the cold front hitting Minneapolis this weekend, Super Bowl LII could officially take place in the coldest weather of any NFL championship. The game will be played in the safe confines of a dome stadium, but with the frosty weather in the Twin Cities area, a sleigh ride makes sense.

The problem, of course, is that traditional sleigh rides require lots of snow and some sort of animal to pull the sled. Without the ability to predict the weather and the fact that these sleds are traveling city streets (that have been cleared of snow), they needed to use a sleigh system with wheels rather than skis. Next, rather than putting the load of an 18-passenger wheeled sled behind living animals, a pair of 2018 F-150 pickups were substituted and the Built Ford Tough Sleigh Ride was born.

Of course, pulling a sled with filled with 18 people is little work for the 2018 Ford F150, which can tow 13,200 pounds when properly equipped. Even if all 18 passengers are heavy duty NFL fans weighing an average of 300 pounds, the people only weigh 5,400 pounds, leaving plenty of room for the weight of the fancy sleigh.

These two sled-pulling F-150 pickups spent the past week traveling the streets of Minneapolis, making stops at the corner of 8th and Marquette and 12th Street and 2nd Ave. The 8th Street stop gives NFL fans easy access to the Super Bowl LIVE display chock full of NFL players past and present along with a full spread of Ford pickups.

Win NFL Season Tickets
In addition to getting fans around the city, the Built Ford Tough Sleigh Ride stops have stations where everyone can sign up to win season tickets for their favorite NFL team. Before loading into the sleds behind the new F-150 pickups, fans can sign up to win season seats for their favorite team’s home games as part of the Toughest Ticket Sweepstakes.

If you want to participate in the Built Ford Tough Sleigh Ride, the trucks are running through tomorrow (February 3rd), but you can sign up to win NFL season tickets at the website for the contest.

Are you headed to the big game? Tell us who you are rooting for in the comments below!