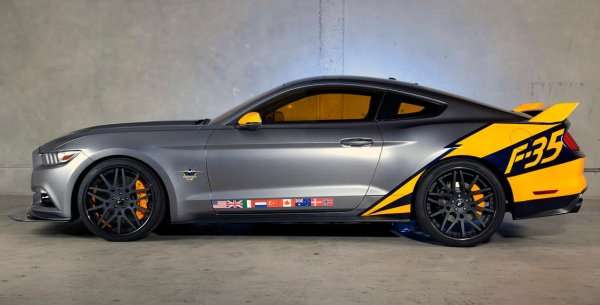 Last week we brought you the news that a unique 2015 Ford Mustang GT sporting a design scheme inspired by the Lockheed Martin F35 fight jet and when the auction for that gorgeous Mustang came to an end – it raised an impressive $200,000 for the EAA Young Eagles charity.
Advertisement

Over the past 7 years, Ford Motor Company has been a sponsor of the annual Experimental Aircraft Association (EAA) AirVenture event, offering up a uniquely customized Ford Mustang with an aeronautical theme to be auctioned off after serving as a show car for the event. The proceeds of these Mustang auctions go to the Young Eagles charity, which provides funding to help our future flyers afford programs which would otherwise be too expensive. Over the past 6 years leading up to the 2014 event, the sale of these custom Mustangs has raised over $2.5 million for the group.

No 2015 Mustang Availability Yields Big Demand
Any customized Ford Mustang that has been designed to raise money for charity is a big interest item, but the 2015 Ford Mustang GT designed to pay tribute to the F35 Lightning is likely one of the biggest deals in the charity auction world in quite some time. You see, with no 2015 Mustangs available right now, the chance to own one – and one that is so unique – simply by making a large, tax deductible donation to a great charity is very attractive. Right now, it is just short of impossible to guarantee that you will get one of the early S550 Mustang fastbacks, but the individual who purchased the F35 Mustang will get one of the very first next generation Mustangs – one that is arguably one of the coolest “factory” Mustangs we have seen in many years.

That was how much the winning bidder paid to secure his or her place in Mustang history by being the first owner of the F35 Lightning II Edition 2015 Ford Mustang GT. It is unclear whether the owner got to take delivery of the F35 Mustang right away or if they will have to wait until the car has been formally launched at dealerships around the country – but we know that the $200,000 bidder will definitely be among the first 2015 Mustang owners in the country.

The F35 Lightning II Edition 2015 Ford Mustang GT
For the 2014 EAA AirVenture auction, Ford Motor Company put together a 2015 Ford Mustang GT with a design scheme that pays homage to the Lockheed Martin F35 Lightning II fighter jet. This new S550 Mustang wears a unique paint setup that has satin grey paint with dark blue and bright yellow trim – and the huge F-35 logo on the rear quarter panels. This Mustang also features a unique rear wing, yellow tinted glass, a front splitter, a rear diffuser, a set of 21 inch wheels, a big brake kit with yellow calipers and a spread of interior accents including the F35 logo on the seatback of the Recaro racing buckets. This is all in addition to the many standard features of the 2015 Mustang GT – including the 435 horsepower, 5.0L V8 engine. The 2015 Mustang GT is the fastest and most powerful “GT” model ever and with the Lockheed Martin F350 Lightning II package – it is also the fastest looking Mustang to date.

Congrats to the winner of the F35 Lightning II Edition 2015 Ford Mustang GT auction and a big thumbs up to Ford Motor Company for offering up yet another great looking auction car for charity.