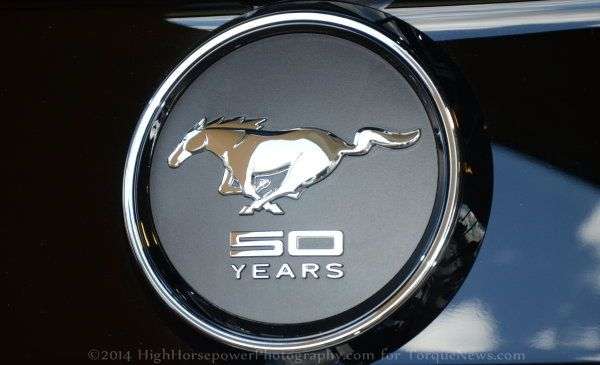 To celebrate the 50th birthday of the mighty Mustang, Ford will build 1,964 examples of the 50 Year Limited Edition 2015 Mustang GT and the very last of those limited edition pony cars will be auctioned off at the Barrett Jackson Auto Auction in September – with the proceeds going to the Edith and Benson Ford Heart & Vascular Institute.
Advertisement

The 2015 Ford Mustang is a big deal because it introduces the US to the newest generation of the fabled pony car while also being the first to be marketed all over the world. The 2015 Mustang is also special because it is the focus of Ford’s 50th anniversary celebration for the Mustang – with the 2015 Mustang marking the 50th full model year. The original Mustang was introduced in April of 1964 as a 1964.5 model for a short model year, but 1965 was the first full model year so 2015 marks a pretty big celebration for Ford.

“Ford Mustang inspires passion like no other car,” said Raj Nair, Ford group vice president, Global Product Development. “The visceral look, sound and performance of Mustang resonates with people, even if they’ve never driven one. Mustang is definitely more than just a car – it is the heart and soul of Ford Motor Company.”

To celebrate this huge birthday, Ford Motor Company created the 50 Year Limited Edition package for the 2015 Ford Mustang. Only 1,964 examples of the 50 Year Mustang will be built and the final unit – vehicle # 1,964 – will be auctioned off in September by the Barrett Jackson folks and the proceeds will go to the Edith and Benson Ford Heart & Vascular Institute.

The 50 Year Limited Edition 2015 Ford Mustang GT
The 2015 Ford Mustang GT 50 Year Limited Edition package begins on the outside where Ford has added a unique chrome grille, chrome trimmed taillights and uniquely chrome trimmed side windows. There is also a unique 50 Year rear Mustang logo between the taillights and, best of all, a set of awesome louvered rear quarter windows – both features that are not available on any other 2015 Mustang. These 1,964 Mustangs will also come with the 19” split spoke wheels of the Performance Pack, wrapped in high performance tires and tucked over the Brembo high performance brake setup.

On the inside, the 50 Year Mustang features more unique design, including added chrome, a black and white leather seat pattern with embroidered 50 Years logos and, literally, every single option that you can get on the 2015 Mustang GT. Ford has even added in the Performance Pack features as standard equipment on the 50 Year Limited Edition Mustang, making these the only 2015 Mustangs with the automatic transmission to get the Performance Pack. Click here for a closer look at the 50 Year Mustang in full detail.

This is a car with an MSRP that will top the 2015 Ford Mustang range, with dealership markups likely pushing the 50 Year models up past the pricing of the 2014 Shelby GT500…but such is the price for one of the most unique and most significant Mustangs ever made.

Mustang #1,964 Auctioned for Charity
The first Ford Mustang was introduced on April 17th 1964, so to commemorate that year, there will be just 1,964 examples of the 50 Year Limited Edition 2015 Ford Mustang built. While the vast majority will be shipped to dealers who will likely jack the price up and sell them to people who will never drive them, the very last unit built will be auctioned off for charity. After making its grand debut at the Get Your Heart Racing Pit Party in Detroit on September 12th, the final 50 Year Mustang will be shipped to Las Vegas for the Barrett Jackson Auto Auction that runs from September 25th through the 27th. The proceeds of this auction – which could go for well over a quarter million dollars – will go to the Edith and Benson Ford Heart & Vascular Institute that holds the Get Your Heart Racing event.

The Get Your Heart Racing charity was also the benefactor of the “Hero Car” from the recent Need for Speed movie and that heavily customized 2014 Mustang GT raised $300,000. I would think that a 2015 Mustang GT with a great deal more collectable value will raise more than the car from Need for Speed.