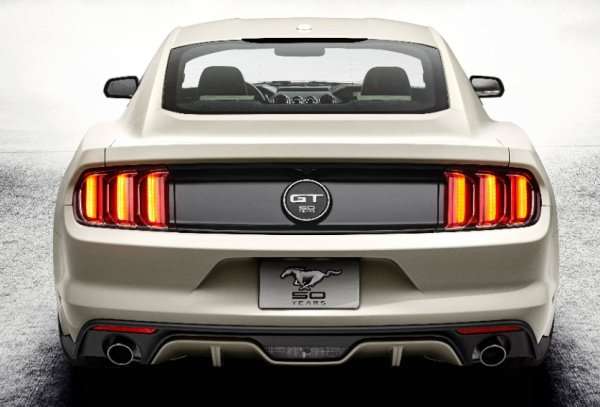 The original Ford Mustang was introduced 50 years ago tomorrow at the New York World’s Fair and to commemorate the pony car’s golden anniversary, Ford has announced the 50 Year Limited Edition 2015 Ford Mustang – a loaded up package that will be limited to just 1,964 units.
Advertisement

Over the past few months, several spy photographers have caught a white 2015 Ford Mustang GT test mule driving around the Metro Detroit area with some interesting cues that led many of us to believe that the Motor Company was planning a special 50th Anniversary Edition package. Turns out, all of that speculation was spot on and like the original Mustang that debuted on April 17th back in 1964, this exclusive new 2015 Mustang GT 50th Anniversary Edition package will debut tomorrow on April 17th at the 2014 New York International Auto Show.

"When Mustang was approved for development more than 50 years ago, I don't think anyone imagined it would spawn such a dedicated base of fans around the world and still be in production today," said Bill Ford, executive chairman, Ford Motor Company. "We are thrilled to be here in New York – where Mustang was first shown to the public at the 1964 World's Fair – to re-create that historic event for today's Mustang enthusiasts." The 2015 Ford Mustang GT 50 Year Limited Edition is designed pay tribute to the Mustang that debuted back on April 17th 1964 and that begins with a spread of chrome tidbits that you won’t find on other 2015 Mustangs. First off, the 50 Year Limited Edition Mustang wears a unique grille with the running pony in the paddock and a set of thin horizontal trim pieces running through the grille all finished in bright chrome. There is another subtle chrome treatment applied to the new tri-bar LED taillights along with a chrome piece that runs around the top edge of the side window glass. "The new Mustang blends a muscular, contemporary shape with design cues that define it as quintessentially Mustang," said Moray Callum, Ford vice president of design. "The 50 Year Limited Edition adds details that set it apart from other Mustangs, while hearkening back to the 1965 original."

Next, Ford has added a unique rear Mustang GT logo with “50 Years” along the bottom and – my favorite feature – the uniquely louvered rear quarter windows. Rather than using a piece of painted fiberglass to cover the rear quarter windows, the 50 Year Limited Edition 2015 Mustang wears rear quarter windows that are louvered by layered glass. This provides the sporty louver look, but it should do so without obstructing the driver’s vision. Also, it looks wicked cool so I would imagine that we will see more of these louvered glass windows on future Mustangs. "Chrome trim was much more prevalent on cars in the 1960s than it is today, so we added some discreet highlights for the grille, side glass and tri-bar taillamps," said Callum. "The darker Kona Blue provides a particularly striking contrast against the chrome."

Ford Motor Company wanted to leave nothing for owners of the 50 Year Limited Edition 2015 Mustang to desire, so these special edition models will only be offered as a fastback with literally every available option. Buyers will only choose between Wimbledon White or Kona Blue and Manual or Automatic transmission. This means that the interior of these 1,964 S550 Mustang fastbacks will be loaded with everything that you can get including the high end sound system, an elaborate infotainment package and plush sport seats decked out in two tone cashmere and black leather with the 50 Year logo embroidered on the seatback. Finally, there is an engraved 50 Year badge on the passenger’s side of the dashboard that matches the silver highlights in the unique gauge cluster. The most exciting part of the 50 Year Limited Edition 2015 Ford Mustang GT is ability to go very, very fast. These special Mustangs are all powered by the 5.0L V8 with “at least” 420 horsepower and 390lb-ft of torque. Those models equipped with the automatic transmission will get 3.55 rear gears while the manually shifted models will get 3.73 rear gears. Also, all 1,964 special edition Mustangs will be fitted with the Performance Pack, which can normally not get with the automatic transmission option so these 50 Year models will be the best performing 2015 models with the self-shifting transmission. This adds Brembo brakes, unique 19 inch wheels, high performance Pirelli tires and a Torsen differential in manual models.

"Mustang fans love to drive their cars, even the rarer examples of the breed, so we built this limited-edition from the best-performing 2015 Mustang available – the GT fastback with the performance pack," said Dave Pericak, Mustang chief engineer. "While some collectors will undoubtedly stash this car away in a museum, those who choose to hit the open road will get a world-class sports car that can run with the best." The 50 Year Limited Edition 2015 Ford Mustang fastbacks will be built in the first production run later this year and while pricing hasn’t been announced – we can expect that these unique models will demand a premium price…and perhaps a massive markup by dealerships. Click any of the thumbnails above for a closer look at the new 50 Year Limited Edition Mustang.