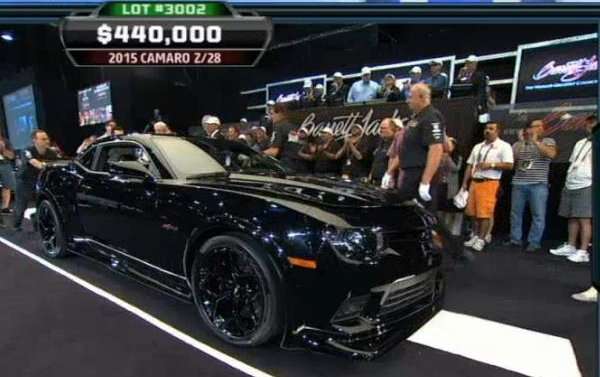 This past weekend, an all black Chevrolet Camaro Z/28 rolled across the Barrett Jackson Auto Auction in Palm Beach Florida, serving as a stand in as bidders sought to win the right to own the very first 2015 Camaro Z/28 – with the winning bid raising an awesome $500,000 for charity.
Advertisement

While the 2015 Chevrolet Camaro Z/28 isn’t any different than the 2014 Camaro Z/28, the current craze of buying “vehicle firsts” at auction for top dollar has become a strong motivator for automakers to donate more vehicles to the high profile collector car auctions. NASCAR team owner and classic car collecting guru Rick Hendrick has become one of the biggest players in the fast paced world of buying future collectables at auction, but for the 2015 Chevrolet Camaro Z/28 – Mr. Hendrick was in charge of auctioning off the first 2015 model year Z/28. This means that Rick Hendrick did (surprisingly) not buy 2015 Camaro Z/28 VIN #001, but that didn’t stop this super muscle car from bringing in very big money.

Although the bidding on the 2015 Chevrolet Camaro Z/28 blasted past the starting bid so quickly that it is almost impossible to see, but the entry price was just $10,000. Within the first few seconds of bidding, the price had climbed up near the normal MSRP of the Z/28. The video below showing the auction of 2015 Z/28 #001 walks us through these first few seconds before jumping ahead to the point at which the bidder crested the $400,000 mark. Bidding slows as the Z/28 gets into the mid $400k range, but the wealthy bidder chasing the world’s fastest Camaro dug deep to stretch the gavel price out to a whopping $500,000. For those who arent interested in hear Hendrick, a member of the Chevrolet team and a member of the AARP team can just ahead to the 2:25 mark to catch the auction action.

The buyer of the 2015 Chevrolet Camaro Z/28 is Dave Flynn, owner of the Flynn Automotive Group in Youngstown, Ohio. Flynn runs a group of dealerships that sell and service vehicles from General Motors, Ford Motor Company and Honda Motors so there is no doubt that he has the money. What is more impressive is that Flynn could have very easily ordered a 2015 Camaro Z/28 however he wanted it right from the factory and paid below MSRP, but instead he paid big bucks – all of which will go to AARP’s Drive to End Hunger.

Dave Flynn didn’t actually get to take home the black Camaro Z/28 that rolled across the Barrett Jackson Auto Auction stage this past weekend. His Z/28 hasn’t actually been built yet, but he will get to configure the car however he wants it – including the exterior color option, the sound package and the option air conditioning – once production of the 2015 model year Z/28s begin.

Congrats to Mr. Dave Flynn for buying 2015 Chevrolet Camaro Z/28 #001...and for making such a sizable donation to the fight against hunger to buy a car that he could have used his own business to get for $75,000.