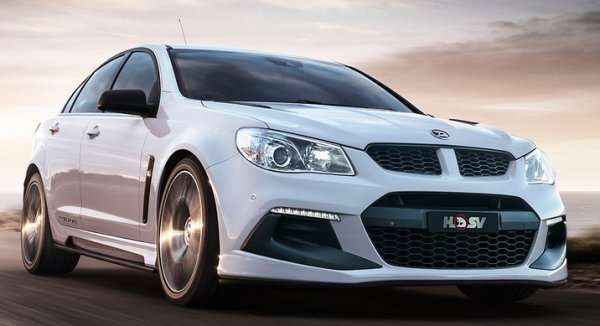 The high performance Holden Commodore will leave the Australian lineup next year, but before it does, the company’s Aussie performance brand HSV will offer up one final, ultra-high performance super sedan with the engine from the C6 Corvette ZR1 and the suspension setup from the Holden VF race cars.
Advertisement

General Motors has a long history of high performance vehicles in the Australian market, but unlike the US, where the 2-door Chevrolet Corvette and Camaro are the top choices of GM gearheads, GM fans Down Under have turned to the 4-door Holden Commodore for their high performance needs. Since 1978, Holden has been rolling out powerful sport sedans built in Australia for the local market, but after 2017, the Commodore will be no more.

The Holden Commodore will replaced by a German-built version of the Opel Insignia, meaning that it will likely depart from the V8/rear wheel drive configuration in favor of a twin turbocharged V6 and all-wheel drive. GM has promised that Australians will love the Commodore replacement, but in the end, it looks as though the Holden muscle sedan will soon be gone.

However, before the Australian-built Holden Commodore as we know it is gone, the high performance Holden HSV division is building one last super-sedan – and it will be the baddest Aussie sedan of all time.

Holden HSV Commodore GTS-R W1
Like all of the high performance Holden Commodore sedans, the HSV GTS-R W1 will be built on the assembly line with the rest of the large sedans, but for this high performance version, the cars are shipping to HSV for the key modifications. This includes the supercharged LS9 V8 from the C6 Corvette ZR1, the Supashock suspension setup from the Commodore VF supercar race cars with adaptation for road use, high performance AP Racing steel brakes and a 6-speed manual transmission.

Power ratings for the HSV Commodore GTS-R W1 are unknown right now, but figure that the LS9 in the Corvette ZR1 produced 638 horsepower and 604lb-ft of torque. The final power levels will depend on the legalization process and local noise restrictions, but we can imagine that the goal is to have this Commodore packing as close to 638 horsepower as possible.

In addition to the high performance mechanical bits, the HSV Commodore GTS-R W1 will likely have an aggressive body kit that improves engine cooling, brake cooling and vehicle aerodynamics – while also allowing the HSV models to stand apart from the “normal” Commodore. The car above is the current HSV Commodore Clubsport R8 LSA, and the GTS-R W1 should have a similar (if not more aggressive) exterior design.

The end result of the HSV GTS-R W1 package is a Holden Commodore that will offer the greatest level of performance of any previous Holden vehicle – while also challenging the best from every other automaker doing business Down Under.

The only downside to the HSV Commodore GTS-R W1 is the price, as the most powerful Holden sedan ever will likely also be the most expensive, with a price climbing into the range of $170,000 (AUS). However, for those who can foot the bill, they will own a legendary piece of Aussie GM performance with what could be the last of the great rear wheel drive super-sedans.