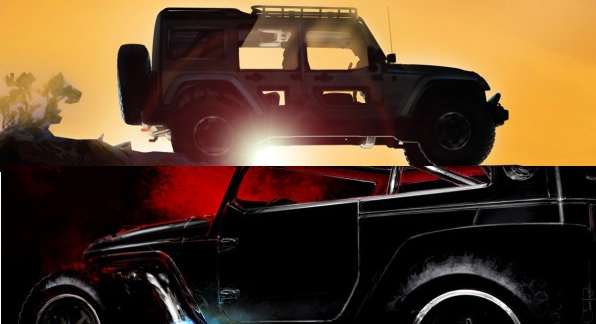 FCA has offered up a pair of teaser images ahead of next month’s Easter Jeep Safari in Moab, Utah, and while the details on these two Mopar-modified Wranglers are scant – I am going to go ahead and predict that we will see at least one custom SUV with Hellcat power.
Advertisement

April 8th through the 16th will bring about the 51st annual Easter Jeep Safari in Moab and ahead of that legendary off-roading event, the folks at FCA have issued two teaser images to foreshadow the collection of concept vehicles set to debut next month in Utah. FCA hasn’t stated exactly how many “Moparized” concept vehicles will be unveiled in a few weeks at the Easter Jeep Safari, but today, we have simple previews of what is coming to Moab – including the Jeep Switchback (top) and the Jeep Quicksand (bottom).

All we have on these concept vehicles is their names and a single image of each, but based on what we can see, we can make a few guesses as to what to expect when these vehicles are introduced in their entirety.

2017 Easter Jeep Safari Teasers
The first teaser image of one of the vehicles set to debut at the 2017 Easter Jeep Safari is the Jeep Switchback, shown with the sunset backdrop in the image above. This is very obviously a Wrangler Unlimited with unique pass-through doors all around and what appears to be a unique hardtop roof with a serious cargo rack. This Jeep appears to sit a bit higher than your average Wrangler Unlimited so I would guess that it has a Mopar lift kit of some sort, making room for what appears to be bigger-than-production tires on Mopar wheels.

The second teaser for the 51st Easter Jeep Safari is the Jeep Quicksand. There are no accompanying details, but I am going to go out on a fairly firm limb here and guess that this will be a conceptual high performance Wrangler off-roader. In this sketch, it looks as though this Jeep has a roll cage behind some low profile front seats, big wheels/tires with an unusual fitment (with a both a stance and a wheelbase which look a big bigger than normal) and a set of headers hanging out of the front wheelwells.

I could be wrong about the headers, but if I am right, this likely indicates that the Jeep Quicksand is powered by a V8 engine. If Mopar is looking to make a Jeep off-road beast that moves quickly through the sand with V8 power, there is no engine better than the Hellcat Hemi. That is purely speculation and Mopar could just as easily use one of their powerful crate engines (like the 5.7L Hemi or the 6.4L Hemi), but there is no question that a Hellcat-powered Wrangler made to blast through the sand would grab plenty of attention at the Easter Jeep Safari.

We will have a closer look at these Moparized Jeeps and the other concept debuts from the Easter Jeep Safari when the event begins next month.