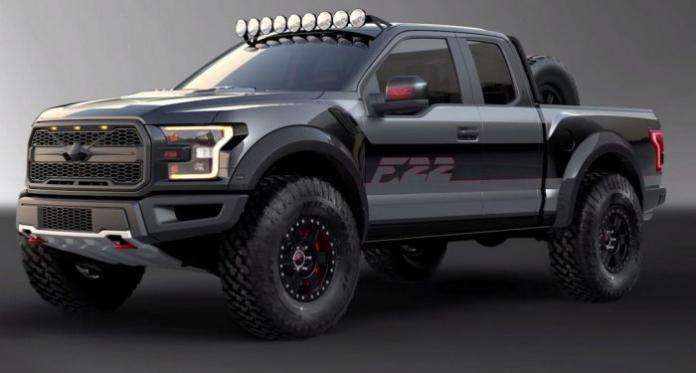 Each year, Ford Motor Company donates a specially outfitted Ford Mustang to be auctioned off at the annual Experimental Aircraft Association AirVenture event in Wisconsin, but for 2017, the automaker has contributed a new F150 Raptor featuring design cues from an F22 Raptor fight plane.
Advertisement

Back in 2008, Ford Motor Company built the Mustang AV8R for the EAA AirVenture program, which was designed with cues from the F-22 Raptor fight plane. That specially built Mustang introduced the glass roof treatment which would eventually become a production feature, but more importantly, that first Ford AirVenture auction car raised $500,000 for the program.

Since then, Ford has built a unique Mustang for the Experimental Aircraft Association AirVenture program each year, with each customized muscle car featuring design cues from historic military aircraft. This program continues for the upcoming 2017 Experimental Aircraft Association AirVenture, but for the first time, the Motor Company has built a unique F150 rather than a Mustang.

On the outside, the F-22 Raptor F150 features a unique paint scheme with colors borrowed from the old F-22 fight planes, a spread of lights across the top of the windshield, unique wheels wrapped in huge offroad tires, unique mirror lights similar to those found on a plane’s wings, F-22 graphics, a unique grille and a unique tailgate panel with the F-22 logo. Finally, there is an extra set of tires mounted in the bed, similar to an offroad race truck setup.

The exterior design package of the F-22 Raptor F150 leaves no question that this is a unique pickup, but Ford didn’t stop at appearance upgrades.

First, the F-22 Raptor F150 has a larger intercooler and an engine tune which lifts the output to 545 horsepower. Next, a high performance suspension setup adds more ground clearance (while allowing plenty of space for those big tires) and a performance braking system allow this customized F150 Raptor to handle the roughest terrain without breaking a sweat.

Over the past 9 years, the Ford vehicles have raised millions of dollars for the Experimental Aircraft Association AirVenture education program, with the Ole Yeller Ford Mustang at the 2016 event raising $295,000. We can expect that this unique Raptor will easily bring six figures when the event opens later this month.