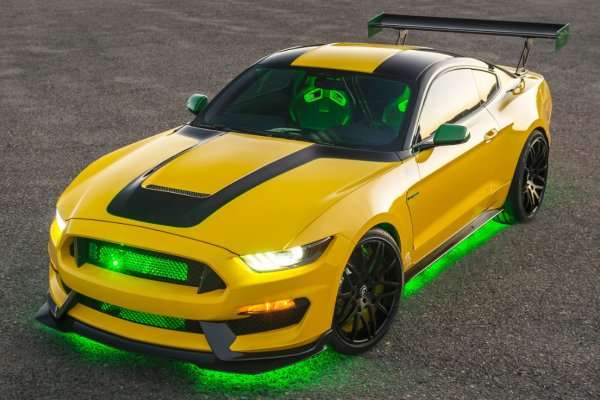 Ford Motor Company recently built and donated a uniquely designed Shelby GT350 Mustang for the Experimental Aircraft Association and with the auction for that car having taken place last week, the automaker has announced that the bright yellow muscle car raised $295,000 for the charity.
Advertisement

Each year, the Experimental Aircraft Association (EAA) holds their AirVenture event in Oshkosh, Wisconsin and for each of the past 8 years, a specially designed Ford Mustang has been auctioned off for the EAA’s youth education programs. The 2016 AirVenture marked the 9th year with a custom Ford Mustang and for the most recent fundraising effort, Ford picked a bright yellow Shelby GT350 model.

While simply offering up a 2016 Ford Shelby GT350 Mustang would surely bring in a fair sum of money for the charity, the Motor Company teamed up with a long list of aftermarket companies to create an amazing custom muscle car – appropriately named “Ole Yeller”.

“This year’s one-of-a-kind Ford Mustang honors two aviation greats, the iconic and historic P-51D Mustang fighter plane, and highly decorated fighter pilot, test pilot and air show performer, Bob Hoover, who is referred to by many as one of the greatest pilots ever to have lived,” said Edsel B. Ford II, a member of the Ford board of directors. “The Shelby GT350 Mustang, with its nimbleness, speed and aerodynamics, provided us with the perfect platform to create this tribute to the P-51D aircraft. Through this project, we take great pride in continuing our support for EAA youth education programs.”

The Ole Yeller Ford Mustang
The Ole Yeller Ford Mustang started as a 2016 Shelby GT350 model with the flat plane V8 offering 526 horsepower and 429lb-ft of torque. The Motor Company then added the unique bright yellow paint with dark accents and Old Yeller badging, unique wheels and tires, sportier body bits, Recaro race cars, green lighting inside and out and other small items to make this Mustang so different from the “normal” GT350.

Not considering the modifications, this 2016 Ford Shelby GT3550 Mustang would be around $50k, but at the recent auction for the EAA AirVenture, this gorgeous yellow muscle car sold for a whopping $295,000 – all of which will go to the EAA youth charities.

“We’re truly grateful Ford is, and has been, such a committed sponsor of EAA and AirVenture,” said Jack Pelton, EAA CEO and chairman of the board. “With its ninth Mustang donation, Ford has definitely delivered something exceptional that any auto or aviation enthusiast would love to own. The Ford “Ole Yeller” Mustang will allow EAA to provide support to our valuable programs helping us grow the next generation of aviators.”