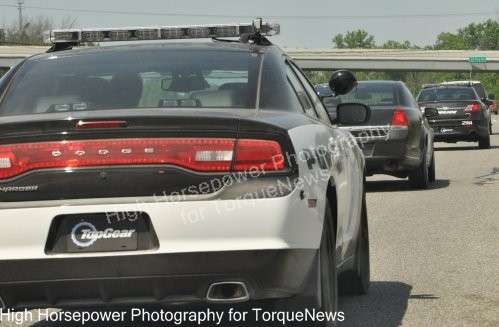 I recently came across a trio of next generation police cars sporting Top Gear license plates and when we caught up to the new cop cars, the three were driven by none other than Top Gear USA’s Tanner Foust, Adam Ferrara and Rutledge Wood – and we have plenty of pictures.
Advertisement

Last night, I noticed a pair of Michigan State Police cars with a new Ford Taurus-based Police Interceptor, a new Chevrolet Caprice PPV and a new Dodge Charger Pursuit all in tow. It seemed odd for the three brand new cop cars to be cruising together so I hurried to catch the trio and when I did, rather than the Michigan manufacturer’s plates or state municipal plates, all three of the vehicles had the plain Top Gear license plates out back. Also, the vehicles had cameras visible inside and out so we knew that this had to be something special. Once we caught up to the fast-moving convoy of cop cars cruising down M-53 near Romeo Michigan, we were elated to see that the rear-most car, the Dodge Charger Pursuit, was driven by Mr. Adam Ferrara of Top Gear USA.

As a big fan of the show…color me excited.

As we continued to pass the vehicles in the Top Gear convoy, we saw that the new Chevrolet Caprice PPV was driven by Rutledge Wood and the new Ford Police Interceptor was driven by rally racing legend Tanner Foust. What we had stumbled across in our daily commute was the cast of Top Gear undoubtedly out driving the next generation Detroit police cars and we can only imagine that these vehicles are being used for an episode for the recently announced third season of the American Top Gear series.

Much like as we see on the show, the three hosts appeared to be talking to each other via some handheld device, especially when we were riding alongside of them and snapping pictures. Adam Ferrara was kind enough to give us a peace sign while Tanner Foust jokingly waved his hands in front of his face as we shot away. Due to the conditions, traffic and such his efforts worked and we were not able to get good driving shots of Tanner behind the wheel of the Taurus SHO-based Police Interceptor. Also, Rutledge Wood seemed to speed up and slow down around us in a manner as to avoid having his picture taken while driving the new Caprice PPV.

We rode alongside the cast of Top Gear for about 15 minutes, trying to get as many different picture angles as possible; made quite difficult by a combination of the two state cops and the speeds at which we were all traveling. That being said, a special thanks to the Michigan State Police who left us alone while we were shooting pictures of the Top Gear stars in action. At one point, the convoy suddenly hit a highway turn around and we weren’t in the correct lane to go with them. Luckily, when I turned around to head back to where we were originally planning to go, I saw the convoy pull into a gas station.

By the time we got through the intersections and into the gas station, the vehicles were all parked with only Rutledge left sitting in his police car. I continued to snap pictures of the three new cop cars when Tanner Foust came out of the gas station and quickly got into his Ford Police Interceptor. As he climbed into the car, he asked me how I was doing and I returned the pleasantries before shooting a few shots of the rally legend climbing aboard the new Ford cop car. At this point, the Michigan State Police came around from the rear of the building and stopped behind my vehicle so I figured that it was time to go. We then headed out and left the famous drivers alone – but not before getting a ton of great shots of the Top Gear USA crew in action.

Based on what we saw last night, we can expect that season 3 of Top Gear USA will feature the guys taking the three new Detroit police cars head to head and based on how dirty the cars were when we saw them – we would expect it to be a pretty exciting shootout.

The gallery above on the right has a very small sampling of the Top Gear USA hosts in action behind the wheels of the new Dodge, Chevy and Ford police cars. Also, the TorqueNews.com Facebook page has over 40 high resolution images that we captured showing the crew cruising the open road with a State Police escort. Click here to visit the TorqueNews.com Facebook gallery.

Thanks again to the Michigan State Police for allowing us to participate in their high(ish) speed ride down the highway and the Top Gear USA guys for being good sports. Also, a special thanks to my wife Amanda of HighHorsepowerPhotography who did the shooting on the road while I was driving.

Anonymous wrote on December 21, 2012 - 8:38am Permalink
I saw the video, but since it was taken off, I don't remember if they mentioned Adam Ferrara or that conversation.