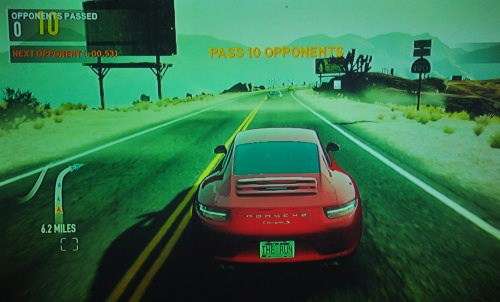 The newest installment of the legendary Need for Speed gaming series draws near as Electronic Arts has made the first playable demo for Need for Speed: The Run available via Xbox Live and the Play Station Network, offering gamers a chance to play the groundbreaking new game a few weeks ahead of the official US launch.
Advertisement

The demo for Need for Speed: The Run starts off very simply, providing a very linear look at the new racer that will have gamers racing across the country, starting in San Francisco and finishing up in New York City. As the demo starts up, you are asked to select from Easy, Normal, Hard and Extreme and once you do, you are whisked away to the car selection screen.

When you first fire up the demo for Need for Speed: The Run, you are given just one car to pick from in the form of the Lamborghini Gallardo LP550-2 Valentino Balboni edition. As “being stuck with one car” goes, a Gallardo LP550-2 is a pretty good car to be “stuck with” but as soon as you invite a gaming friend to download The Run demo, you will unlock the 2012 Porsche 911 S. There is no surprise that EA picked the new Porsche 911 S for the demo, considering all of the fuss lately about how the NFS series has the exclusive rights to use the new Porsche in their games.

Once you have picked your car (I picked the Lambo), you will sit through a couple loading screens that offer tips for the game as well as a plug for the contest in which Need for Speed: The Run is giving away a 2012 Porsche 911 S. You can read more about that contest by clicking here. Just before the demo gameplay begins, there is a series of fast-moving action shots showing high end cars tearing across the screen along with a look at Jack running from the police – with Jack being the name of your character in the game. Just prior to the gameplay beginning, the following words flash across the screen: Jack has one chance…San Francisco to New York City…$25 million payout…Winner Takes All.

The first bit of actual gameplay from Need for Speed: The Run takes place on the Desert Hills course in Death Valley National Park in California. This race takes place along a 6.2 mile stretch of a curvy desert road and your task is to pass the 10 other cars racing along this stretch. These cars include the BMW M3 Coupe, the Audi R8, the 2012 Chevrolet Camaro ZL1 and some older Porsche 911 models – offering us our first look at the new Camaro ZL1 in the gaming world. Provided that you perform the tasks required and you pass the ten other cars on the road (while also avoiding the normal traffic that includes vehicles like the Dodge Charger SRT8), the game informs you that your position has improved from 172nd position to 162nd – with your goal to be in 100th place by the time you get to Vegas.

The demo for Need for Speed: The Run then jumps ahead to Independence Pass in Colorado, where Jack stands in the cold, staring at a road block with signs that explain that this road is closed to due blasting. All of a sudden, an Audi R8 blows past our hero who then runs to the Lamborghini (or the new 911 S, depending on what you’ve chosen) and the race is on. The task for this mode is simple – to get down the mountain. It seems easy enough but you are also forced to race with the R8 while blasting is taking place along the course – causing avalanches that block large parts of the road. The debris falling onto the road contains both smaller chunks of snow that you can blast through but this also includes some dark, larger chunks that you find out when you slam into them. Should you hit them, your car is “wrecked” and the game rewinds to before you crashed with a chance to “try again” 5 times. After that, you lose and have to start again from the beginning. Should you avoid the falling rocks and finish this stretch, the game informs you that you have moved from 87th to 86th with the goal of being at least 50th by the time you reach Chicago.

After you have completed that second “mission”, the demo is over and before returning to the title screen Electronic Arts reminds you that the full version of Need for Speed: The Run arrives in stores on November 15th, 2011 for US gamers – closing with one more plug of their contest to win a 2012 Porsche 911 S.

The demo for Need for Speed: The Run only gives us a small taste of the new cross-country racing game but from what we have seen so far, we cannot wait to get our hands on the full copy next month. To get the free demo of Need for Speed: The Run, check out the marketplace for your applicable gaming system – it is well worth the time spent downloading.

Check out the gallery on the right by clicking any of the thumbnails for a closer look at the Need for Speed: The Run demo!