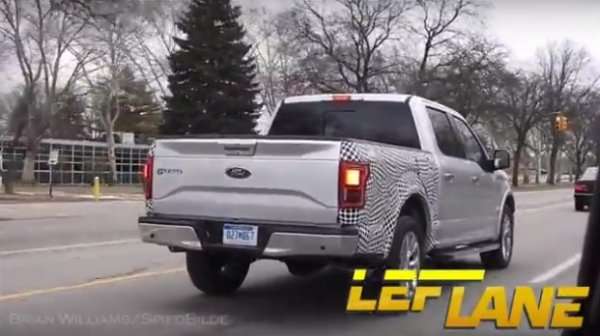 A while back, some pictures surfaced showing what was believed to be a Ford F150 test truck with a diesel engine and while those pictures were rejected by some as proof of anything – this new video leaves absolutely no question that Ford is definitely tinkering with a diesel F150.
Advertisement

When some pictures surfaced late last year showing a current generation Ford F150 test truck with Venturi exhaust tips, the internet was abuzz with long-awaited proof that a diesel F150 existed. There had been rumors spread by scores of hopeful owners about the possibility of an F150 to properly battle the Ram EcoDiesel, but those images were seemingly the first proof that something could be in the works.

Unfortunately, those pictures only told us so much and in the end, skeptics were quick to point out that diesel exhaust tips do not guarantee that it was a diesel F150.

This video guarantees that there is a diesel F150 test truck on the road (if not many more of them), putting the sleep any of the skepticism around the pictures that we saw a while back – even though this truck doesn’t have the Venturi exhaust tips.

The Diesel F150 Video
The video below, which was posted on YouTube by the folks at LeftLaneNews.com, shows what is obviously a modern generation Ford F150 test truck, complete with some black-and-white polka-dot camouflage on the bedsides. When the video begins, the cameraman is just behind the F150 mule, but you can hear the faint sound of a diesel engine. As the video progresses, the camera and the Ford test truck both drive a short distance and come to a stop – this time with the camera positioned right next to the exhaust of the F150.

At this point, there is no question that this silver Ford F150 is making diesel engine sounds. This means that this Ford test truck has been rigged up to sound like a diesel to throw us all off – or because that is just plain silly – this is an actual F150 diesel test truck.

In addition to idling, we get to hear the diesel engine work as this F150 drives away from the camera, bolstering the belief that this is a half-ton Ford truck with a small diesel engine.

Oddly, when the camera gets further towards the front of this mysterious Ford F150, it looks as though it is wearing EcoBoost badging on the doors – or some type of badging in the same location as the EcoBoost badges on the current F150. Again, maybe those are there to throw us off, but this truck definitely has a diesel engine.

Tesla Contemplates A New Strategy for China Retail even As Sales Boom
Jay Leno on Elon Musk & EVs: “I Think He Should Get ... Credit"
END_OF_DOCUMENT_TOKEN_TO_BE_REPLACED