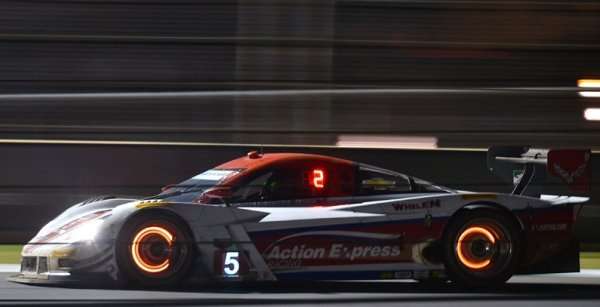 This weekend Ricky Taylor and Jordan Taylor become the first ever American born drivers to win the Petit LeMans in their Corvette Daytona Prototype with help from Italian teammate Max Angelelli, but the Road Atlanta win wasn’t enough to stop the Action Express Corvette DP from winning the 2014 United SportsCar Championship.
Advertisement

Coming into Road Atlanta for the Petit Lemans – the final stop on the 2014 United SportsCar Championship series – the Prototype class was led by three teams campaigning the Chevrolet Daytona Prototype. In addition to being one of the key endurance races run in the world, the 10 hour race at Road Atlanta would help decide the winners of the 2014 driver, team and manufacturer’s championship.

The Final Run for the Championship
The #5 Action Express Corvette DP was in first place in the team championship battle with 316 points while the #10 Wayne Taylor Racing Corvette DP was second with 294 points and the #90 Spirit of Daytona Corvette DP was third with 293 points. In the driver’s championship, Action Express drivers Joao Barbosa and Christian Fittipaldi were tied for first with 316 points followed by Taylor Racing drivers Ricky and Jordan Taylor with 294 points in second while Michael Viliante and Richard Westbrook of the #90 Spirit of Daytona car were third with 293 points. With 36 points on the line for the winner of the Petit LeMans, the championship was within reach of all three Corvette race cars, but the 22 points lead for the Action Express car would be a major deficit to overcome for the #10 or #90 Corvette.

In the manufacturer’s championship, Chevrolet’s lead of 14 points over Ford would be insurmountable unless none of the Corvette DP teams showed up to race. By showing up, the Corvette teams guaranteed that Ford could not claim the automaker’s title for 2014.

The Battle on the Track
Taylor Racing came out in the first practice session for the Petit LeMans with their #10 Corvette DP and set the bar high, turning the fastest lap of round one. The #5 Action Express team came out in practice #2 and turned the new quickest lap time of the event, leading the class in this second session. In practice session 3, the #42 Honda was the quickest car in the session, but the #90 Corvette was second quickest, edging out the #5 and #10 Corvette DPs. However, in qualifying, the times followed the standings – with the Action Express car claiming the pole position followed by the Taylor Racing car in P2, the #90 car in P3 and the #01 Ford EcoBoost race car (which came into the race in fourth place in the standings) starting in P4.

This set up a shootout between the top four cars in the Prototype class including three Corvettes and the turbocharged V6 Ford for the championship.

The action was fast and furious over the course of the 10 hour race at Road Atlanta and the drivers of the #10 Taylor Racing Corvette DP aimed to do everything in their power to take their shot at the title. They spent the day at or around the front of the field, turning the fastest lap of the race and being one of only two teams to run 400 laps in the 10 hour race. Unfortunately for Taylor Racing, the other car that ran 400 laps was the #5 Action Express Corvette. Taylor Racing won the race by just 11 seconds, but in finishing second, the Action Express team secured the team championship while Barbosa and Fittipaldi claimed the driver’s championship.

This allowed Chevrolet to claim the driver, team and manufacturer championship in the Prototype class for the 2014 United SportsCar Championship.

For Taylor Racing, they were likely disappointed to settle for second in the championship run, but drivers Ricky and Jordan surely felt a little better since they became the first ever American born drivers to claim the overall victory at the Petit LeMans. Their father, Wayne Taylor (who was born in South Africa), won the original Petit LeMans back in 1998 piloting a Ferrari 333SP.

This was also the first Petit LeMans win for Chevrolet and the second for an American race car – the first since a Panoz LMP1 Roadster took the win back in 1999.