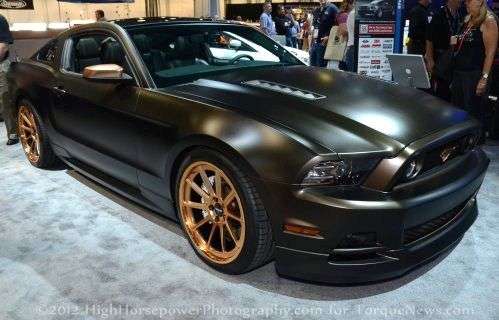 While we have already shown you the new Twin Turbo Cobra Jet and the Vaughn Gittin Jr RTR Stage 3 Mustang, there were five other heavily customized Ford Mustang models in the large indoor Ford company display at the 2012 SEMA Show that are well worth a closer look.
Advertisement

The Ford Mustang was voted the Hottest Car of SEMA 2012 with seemingly hundreds of Mustangs from all generation scattered across the grounds to the Las Vegas Convention Center so it is fitting that Ford Motor Company itself had a large collection of customized Mustangs of their own to show off. Late last week, we looked at the RTR Stage 3 Mustang designed by drift champion Vaughn Gittin Jr as well as Ford Racing’s new Twin Turbo Cobra Jet drag package – two models which are likely to see production in the near future (although the Twin Turbo Cobra Jet is still strictly a concept at this point). Today, we look at five heavily customized Ford Mustangs from Ford’s display that are not intended for production but rather – these Mustangs show just how much can be done to make the Mustang unique from the hundreds of thousands on the road today.

2013 Ford Mustang SEMA Build Powered by Women
First off, we take a look at the custom Ford Mustang that everyone was expecting, as this sexy matte black muscle car was designed strictly by a team of women earlier this year. This was picked via a poll of the general public compared to two other female-designed Mustangs with Jennifer Seely of Ford penning this modified Mustang. (shown in the large image on the right)

The High Gear Mustang, as it was known during the voting process, begins on the outside with a 3dCarbon body kit, a set of custom built headlights, the matte black finish with gold trim and a set of Forgeline 20” lightweight wheels also painted gold. The handling has been improved by a full H&R Springs suspension kit with Whiteline adjustable control arms, sway bars, a rear chassis brace and an adjustable panhard rod. This Mustang is also equipped with Moser axles and a Wilwood Big Brake package. Inside, the Power by Women Mustang features a Katzkin leather interior, a Kicker sound system, Ford Racing sill plates, Roush Performance pedals and luxury floor mats.

Under the hood, the 2013 Ford Mustang SEMA Build Powered by Women features the standard 5.0L V8 engine topped with an Edelbrock E-Force supercharger, K&N air and oil filters, a Flex-A-Lite cooling fan and a variety of dress up items including braided hoses and unique covers on things like the radiator, the fuse box, the battery and the master cylinder. An ACT heavy duty clutch helps send that power to the rear wheels with the help of an ACT ProLite flywheel and a set of Pirelli P Zero tires help make the most of that power by providing improved traction.

2013 Ford Mustang Convertible by Stitchcraft
The only Mustang convertible in attendance was the bright metallic blue droptop modified by the folks at Stitchcraft. Stitchcraft is an interior specialist so it comes as no surprise that the passenger compartment was the clear focus of this build beginning with a fully custom upholstered interior from (you guessed it), Stitchcraft. Next, items like unique fiberglass dash panels, Sparco race seats, 4 point racing harnesses, an integrated iPad system and a top of the line Alpine audio system help make this a truly high end interior layout.

On the outside, the 2013 Ford Mustang Convertible by Stitchcraft wears a body kit by 3dCarbon painted “Stitchcraft Blue Pearl” with a CDC styling bar running between the front and rear seats while a hard tonneau cover gives this topless Mustang a super clear look. A set of 20 inch Forgeline wheels wrapped in Falken tires finish off the exterior of this gorgeous blue Mustang convertible.

The 2013 Ford Mustang Convertible by Stitchcraft is powered by the 3.7L V6 engine that normally offers 305 horsepower but the output has been increased (by an unknown amount) via a Nitrous Express system and a Flowmaster exhaust system. There is also a Hurst short throw shifter to help the driver get through the gears of the 6-speed manual transmission more easily. Helping to improve the handling is a Hotchkiss Performance coiler and sway bar setup while a Wilwood brake kit with 6-piston front calibers and 4-piston rear units take care of the stopping duties.

2013 Ford Mustang GT “Boy Racer” by 3dCarbon
The 2013 Ford Mustang GT “Boy Racer” by 3dCarbon begins – not surprisingly – with an extensive body kit from the folks at 3dCarbon. This new Boy Racer body kit adds a front air dam, a front splitter, new side skirts, side skirt splitters, a rear fascia with a built in diffuser and the 3d500 rear spoiler. Next, 3dCarbon added front fender vents, rear quarter window louvers and that spectacular red with yellow stripe paint scheme. The exterior was capped off by a set of Forgiato 22 inch wheels painted to match the yellow stripes and wrapped in Pirelli PZero rubber. Inside, the 2013 Ford Mustang GT “Boy Racer” features the optional Recaro racing seats wrapped in custom leather and a super dark window tint.

Under the hood, the 2013 Ford Mustang GT “Boy Racer” is powered by the 5.0L V8 engine with a DynoMax cat back exhaust system with the brand’s VT mufflers helping this Mustang to announce it presence. An Eibach suspension setup gives the car a sportier stance while improve handling and a Brembo brake package helps slow this red hot muscle car down.

2013 Ford Mustang GT by DSO Eyewear
The fourth Mustang that we look at today is the 2013 Ford Mustang GT by DSO Eyewear, which may be the most heavily modified Mustang in the Ford booth with significant changes inside, outside, under the car and under the hood. DSO began with the standard 5.0L-powered Mustang GT and began by adding a Ford Racing/Whipple supercharger kit that bumps the output up to 750 horsepower. Helping aid in this big power effort is a Cobra Jet throttle body, a Gibson X-pipe exhaust system, a K&N filter intake system and other items like injectors and new spark plugs. Helping to ensure that this Mustang stops and turns as well as it accelerates, DSO has added an Eibach Pro Kit adjustable suspension package, an Eibach adjustable sway bar kit, Brembo front and rear brakes and a Hotchkiss rear suspension package. MHT22 inch wheels wrapped in Pirelli P Zero tires help keep this Mustang planted firmly in all situations.

Much like the other modified 2013 Ford Mustang models we have looked at today from the 2012 SEMA Show, the DSO Eyewear Mustang also features a 3dCarbon body kit finished in BASF Pearl Custom Tricoat White paint with black accents around the bottom of the car. A CDC custom grille helps to add a more unique feel across the front end while a PIAA lighting package lights the way. Inside, DSO has gone all out with high end leather surfaces, a Rockford Fosgate sound system, aluminum pedals, PIAA interior lighting and a color theme that matches that found on the outside.

Under the hood, the Ringbrothers have added an intercooler ProCharger supercharger package, a Flowmaster performance exhaust system and Flowmaster headers to improve the output of the 5.0L V8 while a Driveshaft shop driveshaft and a Moser specially built 9 inch Ford rear end helps put the power to the wheels. Finally, a BMR Mustang sport suspension package and a Baer big brake package fitted with a Ford Racing brake cooling duct kit helps to slow and steady this monster Mustang.

The gallery on the right side offers a shot of each of these modified Mustangs with captions. Click any of the thumbnails for a closer look and for more pictures of all of these Ford Mustangs – click here to check out the gallery on the TorqueNews.com Facebook page!