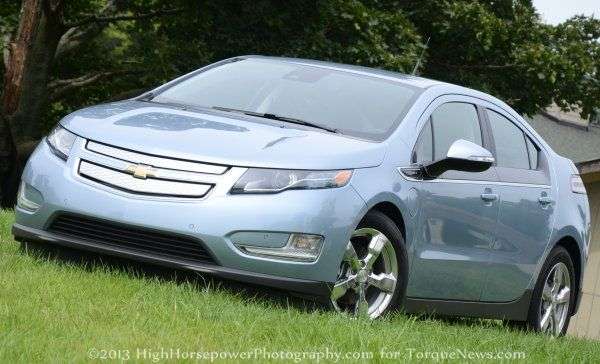 Even though the Chevrolet Volt saw its October sales numbers drop by some 32% from 2012 to 2013, the extended range EV still posted strong enough sales last month to narrowly beat the Nissan Leaf – allowing the Volt to slightly extend its annual sales lead over the all electric Nissan.
Advertisement

In October 2013, General Motors sold 2,022 copies of the Chevrolet Volt which accounted for a drop of 31.7% compared to the 2,961 sold in the same month last year. Although October saw a big drop compared to the same month in 2012, October was still the 3rd best month of the 2013 year for the Volt and more importantly (for the sake of this article), the Volt sold 20 more units in October 2013 than Nissan sold Leaf EVs.

Sales of the Nissan Leaf were fairly strong in October 2013 with 2,002 units sold making October the 5th best month of the year. In most of the months this year, 2,000 units sold for the Leaf would have allowed the all electric Nissan to claim the monthly sales title and to gain some ground on the Chevy Volt in the run for the annual sales race but with the Volt posting a strong month – the Leaf lost some ground on its top rival.

On the year, General Motors has sold 18,872 copies of the Chevrolet Volt while Nissan has sold “only” 18,078 examples of the Leaf so the Volt holds a lead of almost 800 units as we head into the final two months of the year. This means that the Nissan Leaf will have to beat the Chevy Volt be an average of about 400 units in each of the final two months and based on the sales numbers earlier this year, this is something that the Leaf could do. However, with the Volt having been fairly strong in the final two months of the past two years (excluding a surprisingly weak November 2012), Nissan has a tough road ahead if they want the Leaf to claim its second annual EV sales title and spoil the back-to-back party for GM and its popular Volt.

Now, before any of the Tesla zombies who have consumed too much of Elon Musk’s Kool Aid run to the comment section to insist that the Tesla Model S sedan is actually the bestselling EV in America, I will remind everyone that I opt not to include the Model S in my monthly sales review because the company doesn’t have the cojones to publish their actual sales numbers. While the company offers up their quarterly production figures, the lack of straightforward sales figures for the Tesla Model S like we get from GM or Nissan causes me to exclude the electric luxury car from my monthly EV sales review. After all, if the Tesla Model S was selling well enough to knock off the Nissan Leaf or the Chevrolet Volt – the company would be happy to publish their numbers.

Tom wrote on November 3, 2013 - 12:54pm Permalink
Just Went to GM's Volt web page...it shows an after tax break price of $26,685...Chevy Spark EV after tax break...$19185....Nissan Leaf $21,300....these are prices aimed at bread and butter consumers....versus previous prices directed at early adopter EV enthusiast...The lackluster sales reports; I feel are a clear indication that Tesla is capturing the early adopter EV enthusiast market...Promotional campaigns by GM and Nissan should now emphasize that these cars are built and priced for the more typical consumer.