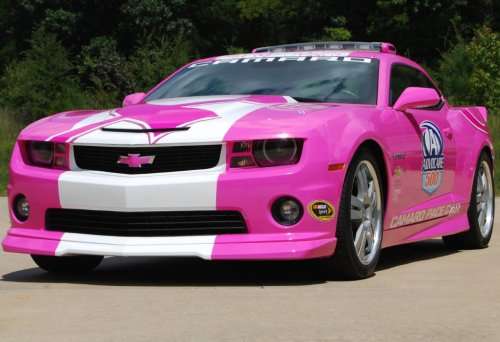 This weekend as the NASCAR Sprint Cup and Nationwide Series arrive at Atlanta Motor Speedway they will be joined by a specially painted pink 2012 Chevrolet Camaro SS Coupe that will serve as the official pace car for Sunday’s Advocare 500 – lapping the field under caution while also donating money to the American Cancer Society.
Advertisement

The sexy pink 201 Chevrolet Camaro SS Coupe pace car shown above will serve as the official safety vehicle for the NASCAR Sprint Cup Series AdvoCare 500 on Sunday and for every lap that the pink Camaro leads the NASCAR field under caution – Chevrolet will donate $200 to the American Cancer Society’s Making Strides Against Breast Cancer initiative. A similar program in 2011 at Atlanda Motor Speedway yielded $12,800 as the Camaro pace car was on the track for 64 of the 500 laps.

“For our 100th birthday in 2011, Chevrolet began its support of the American Cancer Society, and the generous response from our dealers, employees and customers told us we needed to help the Society fight for more birthdays,” said Don Johnson, vice president of Chevrolet Sales and Service. “At Chevy, we believe everyday heroes can accomplish extraordinary things, and it is in this spirit that we work to achieve a world without breast cancer.”

In addition to serving as the official pace car for the Advocare 500 and donating $200 per lap run under caution, Chevrolet will have 30 breast cancer survivors and their families out to Atlanta Motor Speedway where the special VIPs will be given pace car laps around the track. NASCAR Sprint Cup driver Jamie McMurray and NASCAR Camping World Truck Series driver Ron Hornaday Jr. will be behind the wheel for these exciting ride along programs. Also, the first lady of NASCAR - Miss Danica Patrick – will be on hand for photo opportunities and autographs with the families of the cancer survivors.

“Last year, contributions of more than $900,000 supported the American Cancer Society's mission to save lives by helping people stay well and get well, by finding cures and by fighting back against this disease,” said Roshini George, national vice president of health promotions for the American Cancer Society. "As we approach National Breast Cancer Awareness month in October, we want thank the Chevrolet family for its support and remind everyone to take the steps that make a difference in our fight against breast cancer.”

During the existence of the Chevrolet Camaro and its time serving as a pace car in all sorts of racing venues, enthusiasts have been quick to line up for special consumer versions wearing the similar design to the actual pace car. While Chevrolet likely will not be quick to offer up hot pink Camaros for sales – it will be interesting to see what is done with the pink Camaro SS pace car after its time as the Advocare 500 has come to an end. Auctioning it off with the proceeds also going to breast cancer charity would be a great way to put the unique Camaro in the hands of a collector while also contributing more money to the cause. In addition to the hot pink paint, the pace car decals and the safety car light bar; this unmistakable Camaro SS appears to be fitted with items from the GM Accessories catalog including a body kit package, unique wheels and a rear spoiler.

The bad news is that with hurricane Issac bearing down on the southern United States, there is a chance that the Advocare 500 could be hit by rain. However, should the rain stop long enough to get the race up and running, previous rain and cool weather could make the Atlanta race a crashfest – which would be terrible for the teams and drivers but ideal for the American Cancer Society.