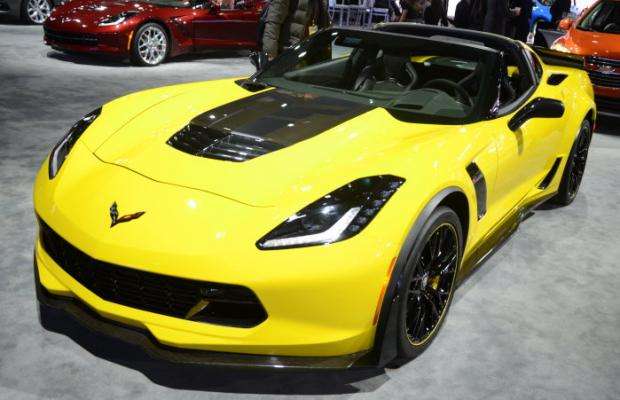 The Seattle-based law firm Hagens Berman has filed a class-action lawsuit against General Motors on the behalf of 2015-2017 Chevrolet Corvette Z06 owners over the well-known cooling issues which can force the supercharged supercar into Limp Mode – hindering the track abilities while possibly creating a safety hazard on the road or the track.
Advertisement

Shortly after the C7 Chevrolet Corvette Z06 began reaching dealerships and owners around the country, stories began to surface about how the new supercar was going into a low power Limp Mode whenever the engine got hot. Many modern cars have a similar setup, where the engine output is greatly reduced to protect the components when internal temperatures get too high, but with the Corvette Z06, it only takes 15 minutes of hard driving in warm temperatures to experience the low power mode.

After the Corvette Z06 had been marketed as a road course monster, owners quickly discovered that it only took a short amount of track time before the car went into Limp Mode. As you might expect, the people who bought the 650hp Corvette to go racing based on the marketing were pretty upset that they couldn’t actually spend much time on the track without the car running into overheating issues.

GM officials commented that the Limp Mode setup was required for the company to be able to offer the full warranty and that the system could be removed via an aftermarket engine tune, but that would jeopardize the engine warranty. It seemed that owners could either modify their computer system, remove the Limp Mode system and void their warranties – or they could stop going to the track with the expectation of racing for more than 15 or 20 minutes.

Well, it turns out that the owners are unhappy enough that a group of them have turned to the law firm of Hagens Berman to file a class-action suit against General Motors for a cooling system defect which leads to the overheating issue and the ensuing Limp Mode.

The ZO6 Lawsuit
The Hagens Berman filing claims that the 2015-2017 Chevrolet Corvette Z06 will go into Limp Mode after as little as 15 minutes of track driving. When the Z06 goes into Limp Mode, the car will slow down dramatically, potentially creating a dangerous situation when cars approaching from behind are going much quicker – and suddenly the new Corvette out in front of them on the track is going considerably slower.

Worse yet, there have been reports of the C7 Corvette Z06 going into Limp Mode after fairly short stints of hard road driving in warmer temperatures, which creates a safety concern for everyone on the road around them. Imagine cruising home on a 95 degree day at 75mph when the Corvette two cars ahead of you suddenly slows way down. As the other cars behind slam on the brakes, the chances of an accident are greatly increased.

Steve Berman, managing partner of Hagens Berman had this to say about the Corvette Z06 lawsuit:
“We believe we’ve found GM to be guilty of a classic bait and switch – one that cost thousands of consumers dearly, up to $120,000, and broke state consumer protection laws. GM enticed race enthusiasts with bells and whistles, promising a car that could maintain safe speeds and power when tracked, but we believe what it sold them was far from what it promised. This defect not only damages the Z06 engine, but endangers drivers.

The defect in question markedly limits the car’s performance – the sole reason these hotrod enthusiasts bought the Corvette Z06 in the first place. If they’d known of this defect at the time of purchase, they likely wouldn’t have spent six figures on the Z06.”

It will certainly be interesting to see how this class-action suit against General Motors plays out, as this problem with the C7 Corvette Z06 has been well-documented since the cars first hit the streets a few years back. If Hagens Berman is successful, owners of the new Z06 could get a check for their troubles, but it could also lead to a buy-back program.

As more information becomes available, you will find it here on TorqueNews.com.

Mark Day wrote on June 15, 2017 - 3:43pm Permalink
Brilliant, a race car that can't be raced. Worse – I was forced to bailout GM incompetence. I've gone from all GM, to no GM, vehicles.
Bigbusiness wrote on June 15, 2017 - 6:20pm Permalink
Viper runs all day with out any issues on the track
James K Morley wrote on June 29, 2017 - 4:33pm Permalink
I own a 2014 Chevy Silverado High Country. At about 48k miles my compressor literally blew up. $1700 later my AC worked. 2 months ago my condensing coil has a leak and no I did not have a wreck. GM can not produce the part I need and they have no idea when the part will be available. In my opinion in the 21st century the fact that a company cannot service a 3 year old vehicle is beyond comprehension. So a 52k brand new truck I will have had to spend in excess of $3000 to repair my AC and currently GM cannot even provide the parts. Absolutely pathetic.

For Some Former Daimler Managers Daimler Is Authority, While Tesla Is Like a Startup
How Daimler Unintentionally Subsidizes Tesla Giga Berlin
END_OF_DOCUMENT_TOKEN_TO_BE_REPLACED