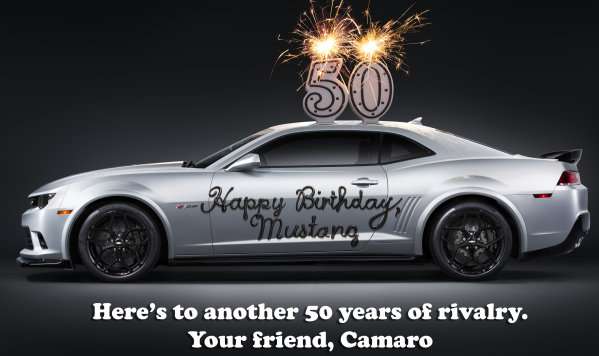 The Ford Mustang turns 50 years old later this week and today General Motors posted an image of the 2014 Chevrolet Camaro Z/28 with a set of candles and a friendly message wishing its bitter rival a happy 50th birthday.
Advertisement

In the world of automotive rivalries, there are few that have lasted as long as remained as competitive as the ongoing battle between the Ford Mustang and the Chevrolet Camaro. Many Mustang owners don’t like Camaro owners simply because they own a Camaro and the same is often true of how faithful Camaro owners feel about those folks who prefer the Mustang. Really, the only rivalry that I can think of in the American auto industry is that between the pickup trucks of the Detroit automakers, but even that pales in comparison to the fight between the Mustang and Camaro across the past 5 decades.

“For five decades, the Camaro and the Mustang have been battling it out in every possible setting,” said Mark Reuss, executive vice president, GM Global Product Development. “These two cars have been striving to beat each other on the track, on the drag strip and on the streets. That competition is a big part of why both cars are so amazing, and so popular, today.”

Since the Camaro was introduced for the 1967 model year, this bowtie clad pony car has been directly compared to the Ford Mustang and that will likely be the case until one of the cars should leave production. Ford caught General Motors off guard when they released the Mustang in 1964 and it took GM three years to introduce a car that could compete with the Mustang in every way. In fact, General Motors introduced a pair of pony cars to compete with the Mustang with both the Pontiac Firebird and Chevrolet Camaro taking direct aim at Ford’s compact Mustang. The introduction of the Camaro and Firebird forced Ford to continually improve the Mustang through the 60s, 70s, 80s, 90s and early 2000s and – because of the rivalry between the Mustang and the GM pony cars – the American performance car market flourished for decades.

That battle would rage on through the 2002 model year when General Motors discontinued both the Camaro and the Firebird – much to the displeasure of GM performance fans across the country. It seems in 2003 that Ford had officially won the war, but when Chevrolet reintroduced the Camaro for the 2010 model year, the GM pony car fought back like never before – claiming the sales title in each year since then. The result of this rekindled rivalry between the Mustang and Camaro has caused a huge leap in the American performance car segment as the newest models are more powerful and more efficient than ever before. The Ford Mustang GT had been lingering in the area of 300 horsepower until the “new” Camaro with the LS3 V8 came out with over 400 horsepower…pushing Ford to introduce the new 5.0L V8 with over 400 horsepower of its own. The 2015 Mustang GT is likely to have a touch more power than the outgoing 2014 models and we can expect that the next generation Camaro SS will have slightly more power…and the pattern of growth continues.

So, whether you own a Ford Mustang and you hate the Chevrolet Camaro, or if you own a Chevrolet Camaro and you hate the Ford Mustang, you should be thankful that the other exists because is it that rivalry which has constantly forced both Ford Motor Company an General Motors to do their best to gradually improve their performance car in an effort to stay ahead of the competition.

Finally, for those keeping track, the Chevrolet Camaro is currently in its 40th year of production, having been introduced 47 years ago and taken 7 years off from 2003-2009. The company celebrated the Camaro's 35th birthday with a special red convertible package and with five model years since being reintroduced (2010, 2011, 2012, 2013, 2014), it will be interesting to see if GM rolls out some special package to celebrate the 40th model year of the mighty Camaro. In any case, it is a classy move by Chevrolet and GM to wish the Mustang a happy 50th...although this friendly attitude wont stop GM from trying to steal some New York thunder from Ford with the new 2015 Corvette Z06 Convertible.

Pontiac_Pete wrote on April 15, 2014 - 6:57pm Permalink
Bring back Pontiac and get the Firebird/Trans Am back into this.