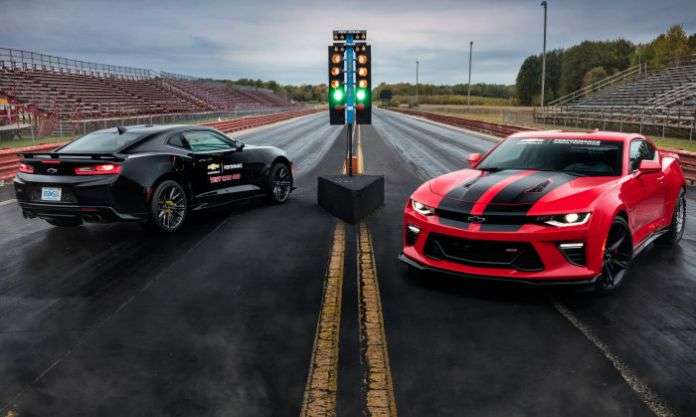 The Chevrolet Camaro beat the Ford Mustang and the Dodge Challenger in the October 2017 sales race, beating the cross-town rivals for the 2nd month in a row – but the Mustang still leads the annual sales race by a massive margin.
Advertisement

The Chevrolet Camaro did something in October 2017 that it has only done one other time since the 6th generation car was introduced in late 2015 – it beat the Ford Mustang and the Dodge Challenger for the second-straight month. Sales of the 6th gen Camaro have been slow while sales of the Mustang and Challenger have been relatively strong over the past three years. Because of this, the Camaro has only led the muscle car segment in sales five times since the start of the 2015 calendar year, but September and October 2017 were two of those months, so it looks as though Chevrolet could finish the year strong…but not strong enough to catch the Mustang in the annual sales race.

October 2017 Muscle Car Sales
In October 2017, General Motors delivered 5,674 examples of the Chevrolet Camaro. This is a big drop from September’s figure of 7,430 while also being a significant decline from October 2016 (6,277), but with the Dodge Challenger and Ford Mustang both posting declines in sales from the month before, the Camaro was able to claim the October sales battle. Having won in September as well, the Camaro posted back-to-back monthly sales wins for the first time since September and October of 2016.

Ford Mustang sales have been gradually decreasing throughout 2017, presumably due to the fact that many buyers are now waiting for the refreshed 2018 Mustang. As a result, October was the second-worst sales month of 2017 for the Mustang with just 5,236 units delivered.

The Dodge Challenger posted some great numbers through the summer, but in October, the Mopar muscle car also posted its second-worst numbers of the year, moving just 3,893 units. In fact, October 2017 was the second-worst month for the Challenger in the past three years, but we can expect to see a big spike in Dodge muscle car sales with the arrival of the new 840hp Demon and the new 707hp Widebody Hellcat. However, right now, the Challenger isn’t selling very well after several years of strong sales.

The 2017 Muscle Car Title
On the year, the Ford Mustang leads the muscle car segment in sales with 67,432 units sold through the first 10 months of 2017. The Chevrolet Camaro is a distant second with 59,401 units sold and the Dodge Challenger is third with 56,169 units sold with two months left on the calendar.

With the Ford Mustang leading the Camaro by more than 8,000 units, it is all-but-impossible for the Chevy to close that gap before the end of the year. The Camaro would have to beat the Mustang by an average of 4,000 units over each of the next two months to have a shot at the title, and that seems to be all-but-impossible. Since the Camaro returned to the Chevrolet lineup back in 2009, it has never outsold the Mustang by 4,000 units even in its strongest sales years – so it looks as though the Mustang will once again take the annual muscle car title.

Should the Mustang win the annual title, that will be the third-straight muscle car sales title for Ford after Chevrolet took the title every year from 2010 through 2014.

Meanwhile, after winning a few monthly titles this year and leading the Camaro for much of the year, it looks as though the Challenger will have to settle for third in the class once again. The Dodge is about 3,200 units behind the Chevy, so the Challenger will have to beat the Camaro by 1,600+ units over each of the next two months. That is possible, but it seems unlikely, so we are almost sure to see a Ford-Chevy-Dodge finish for 2017.