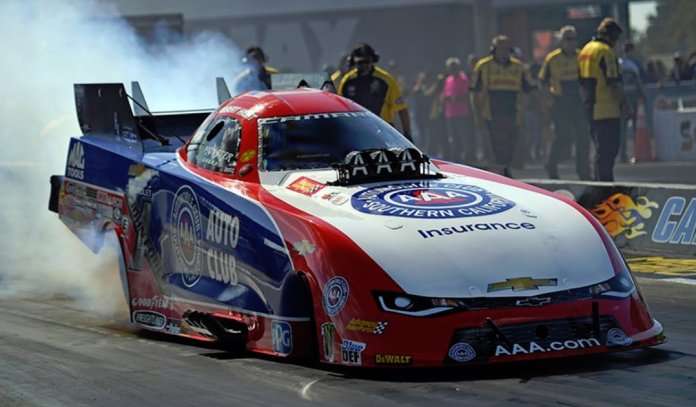 Robert Hight and his Chevrolet Camaro grabbed win #3 of the 2017 NHRA season, beating teammate Courtney Force in an event where the John Force Racing Camaros were the teams to beat all weekend.
Advertisement

After Don Schumacher Racing Dodge Charger funny cars won 12 of the first 13 races of the 2017 NHRA season, Team Mopar has hit a cold streak and in the 6 events since the last DSR win, Robert Hight and his John Force Racing Chevrolet Camaro have won 3 events. The most recent win came this past weekend at the Carolina Nationals, in which Hight beat his teammate Courtney Force in an all-Camaro final round.

As a result of that win in the first of 6 races in the Countdown to the Championship portion of the schedule, Hight has driven his Camaro to the top spot in the run for the title.

Camaros are Quick Out of the Trailer
The John Force Racing Chevrolet Camaro funny cars have done a great job in qualifying all season long, and the Carolina Nationals were no exception.

Although JR Todd was the quickest funny car driver after the first round of qualifying, his time at the top of the class ladder wouldn’t last long, as Courtney Force would jump ahead of Todd in the second round of qualifying. Also in the second round, Robert Hight moved into the 6th spot while John Force sat 9th. Those positions would remain constant through the end of qualifying, so the John Force Racing cars started eliminations in the 1st, 6th and 9th spots while the Dodge-driving rivals from Don Schumacher Racing were 3rd, 4th, 10th and 11th.

This qualifying layout, with Courtney Force up front with her teammates and the rivals from DSR behind, but early on in the season, the Dodge teams quickly knocked out their key competitors on the way to the win. That was not the case at the Carolina Nationals.

Eliminations
In the first round of eliminations, all 3 of the John Force Racing Camaro funny cars won, while only 2 of the Don Schumacher drivers advanced past round #1, with Robert Hight beating Matt Hagan in the JFR/DSR rivalry.

In the second round, Courtney Force and John Force went head to head and after nearly identical reaction times, the father and daughter duo had an incredible race. Courtney took the win, edging out her dad at the finish line. Robert Hight also won in round #2, beating Tommy Johnson Jr while JR Todd beat Ron Capps – effectively removing all of the Don Schumacher Chargers from the funny car field.

In the semifinals, Courtney Force knocked out Alexis DeJoria and Robert Hight beat JR Todd, setting up the first Camaro-VS-Camaro final round of 2017.

In the finals, Robert Hight grabbed an early lead with a big holeshot advantage over Courtney Force and he never looked back, beating Force in another great drag race – giving Hight his 3rd win of the season and giving John Force Racing its 4th win on the season (John Force won the 3rd event of the season).

Championship Standings
The Carolina Nationals was the first of the 6 “Countdown to the Championship” races and with the win, Robert Hight leads the race for the title by 44 points over Ron Capps. Courtney Force is 3rd (56 points back) and Tommy Johnson Jr is 4th (90 points back).