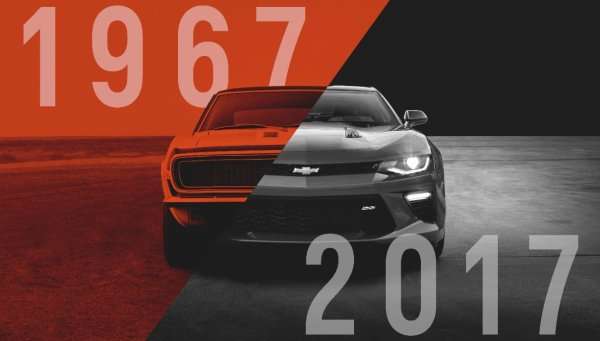 General Motors has announced the list of festivities planned to celebrate the 50th anniversary of the Chevrolet Camaro – which was officially introduced to select media on June 29th, 1966.
Advertisement

We found out earlier this month that there were special festivities planned around the Woodward Dream Cruise to celebrate the 50th anniversary of the Chevrolet Camaro. GM promised that the celebration would be incredible and now that more details have been announced – it most certainly seems like Camaro fans in town for the Woodward Dream Cruise will have an awesome time celebrating the Camaro’s 50th birthday.

“Over the past half-century, the Camaro has fostered enthusiasm, camaraderie and memories like few other vehicles,” said Steve Majoros, marketing director of Chevrolet Cars and Crossovers. “It’s a passion Chevrolet takes seriously and the activities this summer are a way of giving back to those who have made the Camaro an icon.”

The Camaro 50th Anniversary celebration officially kicks off on Thursday August 18th at the Lansing Grand River Assembly Plant, followed by Camaros and Coffee on Friday August 19th at Detroit’s Joe Louis Arena. The grand finale for the weekend will take place at the Woodward Dream Cruise on August 20th, with a Camaro-centric display for the hundreds of thousands of cruise attendees.

August 18th – Lansing Grand River Assembly
The Camaro 50th Anniversary begins on Friday, August 18th at the Lansing Grand River plant where the 6th generation Chevrolet Camaro is built. Starting at 7am, the plant will host a massive car show with a large Camaro-only area, a Camaro heritage display, plant tours, unique 50th anniversary merchandise and a chance to meet members of the Camaro engineering team.

“This is an unprecedented opportunity to get a behind-the-scenes look at building the Camaro from the ground up,” said Todd Christensen, Camaro marketing manager. “Whether you’re a Camaro owner or simply a fan, it’s an event you won’t want to miss.”

August 19th – Joe Louis Arena
The second portion of the 50th anniversary celebration is Camaros and Coffee at Detroit’s Joe Louis Arena, starting at 7:30am on August 19th. This will take place in the arena’s riverfront parking lot, located at 19 Steve Yzerman Drive, with space for up to 500 Camaros. At 9:45am, a group of 50th Anniversary Edition Camaros will lead the crowd of muscle cars from the Joe to Woodward Avenue for a cruise on the route.

August 20th – The Woodward Dream Cruise
Finally, on August 20th, the Chevrolet display at the Woodward Dream Cruise will have a heavy emphasis on the Chevrolet Camaro, with a heritage display and a look at the modern Camaro lineup. Also, the Camaro Corral is back for 2016, giving Camaro owners a place to show their ride along the cruise route in a setting with hundreds of other Camaros.

We will have more information on the Camaro Corral soon, but in the meantime, if you are a Camaro fan – begin planning your trip to Detroit for the weekend of August 18-20.