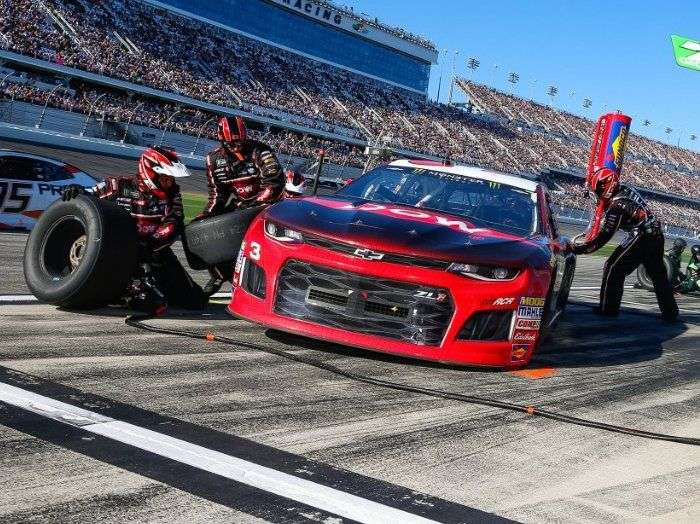 The Chevrolet Camaro got a fantastic start to its time in NASCAR’s big leagues with Austin Dillon winning the Daytona 500 in his #3 Camaro, while the #43 ZL1 of Darrell Wallace Jr took the runner-up position and three other new Chevy race cars finished in the top ten.
Advertisement

After struggling throughout much of the 2017 NASCAR Monster Energy Series, the Chevrolet teams were looking to bounce back during the 2018 schedule of the sport’s pinnacle association. The teams were hoping that a much-needed boost would come from the new Camaro ZL1 race car and after the first event of the season – the 2018 Daytona 500 – the new Chevy “stock car” is looking mighty good.

Camaro ZL1 Looks Good Early
The new Chevrolet Camaro ZL1 stock car got off to a great start during the week leading up to the 2018 Daytona 500. Alex Bowman drove the #88 car into the pole position during single-car qualifying and Chase Elliot won the second of the two Can-Am Duels, putting two new Camaro ZL1 race cars in the top four for NASCAR’s biggest race.

Neither of those drivers would join the prestigious list of Daytona 500 winners, but the new Camaro ZL1 would begin its time in NASCAR’s big leagues with a big win.

First Win for the Camaro
The new Chevrolet Camaro ZL1 was at or near the front of the Daytona 500 field throughout the race, but when the green flag dropped with just two laps left, Aric Almirola was out front in his Ford Fusion. As Austin Dillon made a hard run on Almirola on the last lap, Almirola came up the track to block the Camaro in second. Dillon did not lift, bumping Almirola and sending him into the outside wall.

From there, Dillon just had to cruise to victory and the new Camaro ZL1 race car had its first win in the NASCAR big leagues – and it was the Daytona 500.

“I never really thought about it until we took the lead about having a shot to win. I knew we were in a good spot if I could get a push down the backstretch. Heck, we went down the backstretch, had a run, went low, the No. 43 went low and I just had more momentum than he did and caught him. It turned him, but heck, we won the Daytona 500 — we are sitting here now,” said Austin Dillon.

As you might imagine, Ford fans believe that Dillion’s contact with Almirola should have gotten the Camaro drive disqualified, but no such call was made by NASCAR officials, giving the Chevy driver the biggest win of his career. You can watch the end of the 2018 Daytona 500 in the video below, and tell us what you think should have been the call in the comments at the end of this article.

In addition to winning the race, Darrell “Bubba” Wallace Jr finished second in the #43 Camaro ZL1, Chris Buescher finished fifth in his #37 Camaro, Ryan Newman finished eighth in the #31 Camaro and AJ Allmendinger rounded out the top ten in his #47 ZL1.

The Camaro’s Rein Begins
Chevrolet has long been the dominant manufacturer in every level of NASCAR with vehicles including the Lumina, the Monte Carlo, the SS sport sedan, the Impala, the Bel Air and even the Silverado, but the brand’s two most popular performance models – the Camaro and the Corvette – have never been a part of the sport’s biggest races. Of course, the Camaro has been a success in the NASCAR Xfinity Series, but the level once known as the Winston Cup has never seen a Camaro in its lineup.

That changes for 2018, with the Camaro finally coming to the NASCAR big leagues, and the car couldn’t have gotten off to a better start. This doesn’t guarantee a return to the title spot for Team Chevy, but this is the best possible start in pursuit of the next NASCAR championship for Chevrolet.

“Winning the Daytona 500, the most iconic race of the year, is absolutely incredible,” said Jim Campbell, Chevrolet vice president of Performance Vehicles and Motorsports. “It is a goal every year. It is extra special to win it this year with Austin Dillon and Richard Childress and our new Camaro ZL1 race car. Chevy’s designers and engineers worked well with our race teams to prepare the Camaro ZL1 for this season. We are proud of our partnership with both of them as Austin wins his first Daytona 500 and Richard wins his third.”