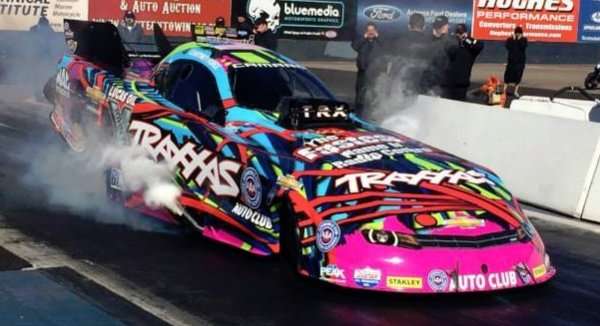 This past weekend marked the racing debut of the new Chevrolet Camaro funny cars from John Force Racing and while Courtney Force’s Camaro turned in the quickest qualifying time, all three JRF Camaros fell victim to traction problems and failed to make much impact in their first event of the season.
Advertisement

A few years ago, General Motors dropped their factory backing of the NHRA drag racing program and that left many Chevy racing fans searching for someone to root for, but with the news that John Force Racing was running Camaro funny cars this year – GM fans had something to be excited about for the new racing season. Not only was the legendary Chevrolet Camaro coming to the funny car ranks, but those cars were being built by the team of NHRA legend John Force. In addition to John Force, the Camaro funny cars are piloted by Robert Hight and Courtney Force.

On paper, the new Camaro had a very good chance of making a big splash as soon as the teams hit the track and the first event of the season came this past weekend, with the teams heading to Auto Club Raceway in Pomona California for the Circle K Winternationals.

The Camaro Funny Car Debut
The Chevrolet Camaro funny car made its first official competition pass down the track on Friday in qualifying for the Winternationals and it did not disappoint. Robert Hight ran an impressive 4.086 second run with a trap speed of 314.09 miles per hour. That’s 0-314 in 1,000 feet and 4 seconds. Courtney Force’s first pass in her new Camaro was a 4.132 at 302.75 miles per hour and John Force’s first pass in his Camaro was a 4.061 at 313.66 miles per hour. At the end of the first round of qualifying, John Force sat in the second spot with his elapsed time of 4.061 falling just 0.001 short of the top spot while Robert Hight sat fourth overall – although Hight’s Camaro turned in the highest speed of the round.

In the second qualifying round, Courtney improved on her first round time, but Hight did not and John Force went across the center line – hitting the timing boxes and tearing up the front of the Camaro body. After Round Two, John Force had slipped to third and Hight had dropped to seventh, while Courtney remained ninth.

On Saturday, times were much quicker across the funny car field, but they were especially quick for the John Force Racing Camaros. Hight was the first, running a 4.045 at 319.06mph and when Courtney Force pulled into the beams for her final qualifying run, things really got exciting. Force’s Traxxas Camaro turned an incredible 3.995 elapsed time with a speed of 322.65 miles per hour. This was the only 3-second run of the weekend, giving Courtney the top spot in the funny car class for eliminations. Dad John Force followed up Courtney’s run with a strong run of his own, putting him in the 3rd spot for eliminations while Hight started 7th.

This was the kind of entry the new Camaro funny cars wanted to make...but it didnt last.

Early Departures
While the qualifying rounds went pretty well for the Camaro teams, the elimination rounds were a different story. Courtney Force was the first of the three to race in eliminations, and she made very short work of Gary Densham, who smoke the tires early on. John Force was next up, running against the Toyota Camry of Bob Bode. Both of these cars had traction issues, both Bode was able to get down the track quicker, sending John Force home in his first ever official race in the new Camaro. Fortunately, Robert Hight held off Tim Wilkerson’s Mustang to go onto the second round.

In round two, Courtney Force lined up with the Camry of Del Worsham and for the second round in a row, a Force Camaro lost traction and lost the race to a Camry. However, Robert Hight pulled the hole shot on Tommy Johnson Jr and although Johnson’s Charger ran the quicker time – the better reaction time by Hight gave the Camaro the win.

In round three, Robert Hight lined up against the Dodge Charger of Ron Capps and after Capps pulled the better reaction time, Hight’s Camaro smoked the tires and handed the win to the Dodge.

This led to an all-Dodge final round between Ron Capps and Matt Hagan, with reigning champion Hagan taking the win.

While the folks at John Force Racing, General Motors and Chevy racing fans around the world had hoped for the first outing for the new Camaro funny car to go a little better, the important bit of information here is that the new Camaro is very fast. JFR is clearly making big power with the new Chevy motors and once the team gets their setups dialed in, we can expect to see Force, Force and Hight battling for some wins this season.