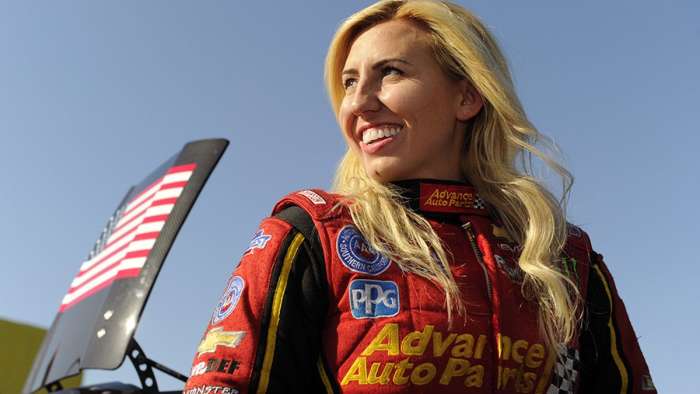 Over the past few years, Courtney Force has become one of the front-runners in the NHRA Funny Car ranks in her John Force Racing Chevrolet Camaro, but with the promise of another strong season in 2019, the winningest female driver in the class’s history has retired suddenly.
Advertisement

Courtney Force and her Chevrolet Camaro were a dominant pair in the NHRA Mello Yello Championship Racing Series funny car class in 2018, sitting as the fast qualifier a whopping 11 times in 24 races, winning 4 times and taking the runner-up position 5 times en route to a 6th place finish on the season. Realistically, if not for the NHRA’s moronic playoff system where the points are reset to give more drivers a shot at the title during the final six races of the season, there is a good chance that Courtney Force would have won the funny car title last year.

The bottom line is that during the course of her short career, Courtney Force has become one of the leading drives in the funny car ranks while also being the most successful woman to ever run a funny car. Today, that career came to an abrupt halt, as Force announced that she was retiring as a driver, effective immediately.

The Announcement
The news of Courtney Force retiring from driving her Chevrolet Camaro funny car was first posted on the official John Force Racing website, including quotes about her decision.

“I will be stepping away from my driving duties, effective immediately. This was a personal choice as I feel I’m ready to see what the next chapter in my life has in store for me, while spending more time with family,” said Force. “I intend to remain involved in the industry I love and continue to work with a few select partners as I go forward in 2019. I am so thankful that I have had the opportunity to have such a successful career at John Force Racing and the privilege of working with so many incredible people while racing against competitors who pushed me to be a better driver.”

Courtney Force will continue to be involved with the sport and with her race team, but it appears as though her days of rocketing down the track at over 300 miles per hour are over.

A Big Hit
While her teammates likely knew about this move before this morning, this surely comes as a big hit to the John Force Racing team. While Robert Hight is also one of the sport’s top drivers, Courtney Force was considered the future of the JFR, the future of the Camaro funny car program and the future of the sport as a whole. The odds are good that the team will be able to find someone else to drive her car this season, possibly her sister Brittany, who spent some time in a funny car last year while also piloting a top fuel dragster. However, it will be hard for the sport to replace one of its top drivers, who also happened to be the daughter of a legend and one of the most successful female drivers in the history of the sport’s big leagues.

LG's New EV Battery Plant Is a Welcome News for Tesla
Tesla Giga Berlin's New Hurdle: It's Not Only the Gov't, but Now Tesla Itself
END_OF_DOCUMENT_TOKEN_TO_BE_REPLACED