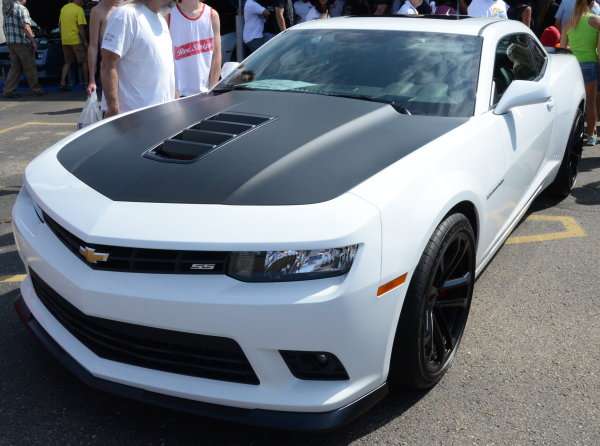 The sales numbers from around the American automotive industry are in and for the 7th consecutive month, the Chevrolet Camaro has comfortably outsold both the Dodge Challenger and the Ford Mustang – which pushed the Camaro’s lead in the annual muscle car sales race to almost 10,000 units.
Advertisement

The Chevrolet Camaro has been the bestselling performance car in America for each of the past 4 calendar years, beating both the Ford Mustang and Dodge Challenger soundly far more often than not since it was reintroduced for the 2010 model year. October 2014 followed that trend, with the Camaro beating the Mustang and Challenger comfortably, even though the 2015 model year muscle cars from Ford and Dodge both began hitting showrooms last month.

October 2014 Muscle Car Sales
In October 2014, General Motors sold 5,406 examples of the Chevrolet Camaro. This number is relatively low compared to most other months this year, but it is a nice rebound from the awful Camaro sales numbers from September. Again, even though Camaro sales were far below where they had been earlier this year, the Chevy muscle car still outsold both the Challenger and the Mustang by a significant margin.

The 2015 Ford Mustang began reaching dealerships and new owners late in October so when combined with the beginning of deep discounts on the 2014 models still sitting on lots around the country, Mustang sales improved by some 40% in October compared to September. Ford sold 4,565 2014 and 2015 Mustangs (the vast majority of those are 2014 models) last month, which is a jump of better than 1,400 units over the 3,158 Mustangs one month earlier.

The Dodge Challenger also improved from September to October, moving 4,140 units – up 500 or so units from the month before. This increase comes due to the introduction of the 2015 models to dealers around the country and as more 2015 Challengers (including the 707hp Hellcat model) reach showrooms, I expect to see Challenger numbers continue to rise. However, it isn’t likely to do any better than third in each of the final two months of 2014.

The Camaro Lead Might be Too Big for the Mustang
All year long as I have been writing about the muscle car sales race, I have been predicting a big spike in Mustang sales once the 2015 models hit the market at full force. Although the 2015 Mustang began reaching buyers last month, they are still just trickling out so the impact on October sales is minimal at best. However, as more dealerships around the US get 2015 Mustangs on their lots, I expect to see a very big jump in Ford muscle car sales.

The problem for Ford is that with a deficit of almost 10,000 units, it is going to be a tough battle in November and December, as the Mustang looks to prevent the Camaro from claiming a 5th straight muscle car sales title. GM has sold an average of about 5,000 Camaros in November and December over the past few years, so for the Mustang to beat the Camaro in 2014 annual sales, Ford will need to sell at least 10,000 Mustangs in each of the final two months while also praying that Camaro sales don’t get much better than 5,000 units per month.

I fully expect to see a big jump in Mustang sales through November and December, but at this point, I don’t think that Ford will sell enough Mustangs to catch the Camaro before year’s end…especially if winter hits Northerners hard during the final months of 2014.

Auto Motive wrote on November 7, 2014 - 4:51pm Permalink
I like all three muscle cars and the hp wars are just beginning. Dodge and the hellcat at 707 hp (a 2017 model re design at about 3600 lbs is a dream come true) Ford will have the GT500 and the 5.8 liter monster with a little tinkering will be over the 700 hp realm to go head to head with the hellcat. Ford needs to add the automatic as a option. Then comes the new 2016 Camaro rumored 3600 lbs with the LT1 engine for the SS and yes down the road the LT4 for the ZL1. Rumor has it the Z06 in 2016 will get a larger super charger similar to the current ZR1 2.3 and will push 750 hp. The hand me down LT4 at 650 hp in a lighter Camaro ZL1 will give Dodge and Ford a run for the best 0-60/quarter mile times. The best news for Dodge in 2016 will be a super charged Viper and yes supercharged to accomplish 750-800 hp. A new hood may be required.
tomi wrote on November 14, 2014 - 6:27am Permalink
No wonder it's a best seller. It looks far better then other two, and from year to year it's growing intgo sexier and hotter muscle looking car. Although interior still looks too cheap