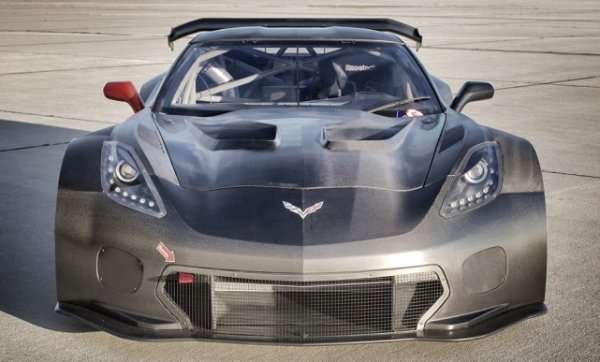 The folks at Callaway have rolled out their new Corvette C7.R GT3 race car and I believe that this might be the meanest looking C7 Corvette we have seen thus far – and this beast will debut in a variety of road racing circuits around the world in 2016.
Advertisement

The Chevrolet Corvette C7.R has been a dominant force in the world of endurance racing over the past two years and in an effort to expand the domination of Corvette racing program around the world, the Callaway Competition has designed a new Corvette C7.R GT3 that will hit the track in the 2016 racing season. The first car will be campaigned in the European FIA endurance racing world, but rumors suggest that we could see some of the Callaway GT3 Corvettes racing in the American endurance ranks as well.

The Callaway C7.R GT3
The folks at Callaway Competition have long been building winning Corvette race cars, but their new C7.R GT3 car could allow both Callaway and the Corvette racing program to take control of a new level of racing in much the same way that the Corvette C5.R, C6-R and C7.R factory-backed teams have dominated the GTE/GTLM ranks.

While this new Callaway Corvette C7.R GT3 has the barebones interior that you would expect from any modern road racer, the outside of the newest Callaway GT3 Corvette is the striking exterior. The massive widebody kit with flares over the front and rear wheels combined with the unique front fascia, the vented hood, the aggressive rear diffuser and the huge rear wing makes for a car that looks very different than the Corvette C7.R GTE cars. The low stance with the extra wide body, all with the stock door, glass and roof lines of the standard Corvette Stingray are aerodynamically ideal for racing, but there is no question this is one wicked looking American supercar. Of course, almost every body panel is carbon fiber in an effort to keep the weight down, but that exposed carbon fiber finish adds even more ‘cool factor’.

Under the hood, the Callaway Corvette GT3 has an FIA-spec 6.2L V8 with 600 horsepower and that power is sent to the rear wheels via a sequential 6-speed transmission with paddle shifters.

Why GT3?
The key advantage of the GT3 and GT Daytona (in the US) class of endurance racing is that it has a lower price point for acquiring the cars needed to go racing, so someone who wanted to run an FIA GT3 class could get into the C7.R Corvette from Callaway for less money than they would have to pay for the Corvette C7.R from the GTE Pro/Am and GT LeMans classes.

The advantage is that if the Callaway Corvette GT3 is successful when it debuts, we could see more of them showing up in the ranks of the Tudor United Sports Car Championship. The disadvantage to this approach is that GT3 has quickly become the most popular option for those looking to get into the sport and as a result, this is often the biggest class at both European and American endurance racing events. While the Corvette Racing teams in GTLM/GTE have to deal with a field of cars from Porsche, Aston Martin, Ferrari, and BMW, the GT3 ranks have much bigger fields and more competitors. The Callaway Corvette in GT3/GTD will have to compete with the best from Lamborghini, Aston Martin, Porsche, Ferrari, Audi, BMW and the Dodge Viper.

However, field size aside, the Callaway Competition Corvette GT3 could make a big splash in the world of racing when it debuts next year, building on the success of the current GTLM and GTE Pro/Am teams.