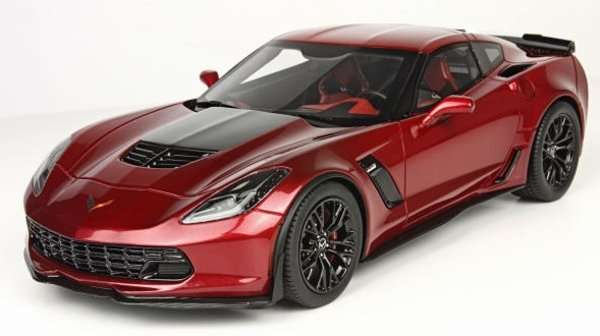 Those folks who love the C7 Chevrolet Corvette Z06 so much that they want to put a small, beautifully detailed version on their desk or shelf at home, BBR Models of Italy has you covered with the gorgeous piece shown above.
Advertisement

While there are surely people who cannot understand why any adult would want a “toy car”, the collectable scale car industry is gigantic and, not surprisingly, cars like the Chevrolet Corvette Z06 are particularly popular. In some cases, people collect small scale versions of cars that they dream of someday owning and in other cases, people collect smaller versions of the cars parked in their garage. In many cases, collectors will pay what others might consider to be insane amounts of money for a “toy car” and for those hardcore collectors – I bring you the 2015 Chevrolet Corvette Z06 1:18 scale resin replica.

BBR Models Corvette Z06
In many cases, these small scale collectable cars have metal bodies, but like the actual 2015 Corvette Z06, this tiny supercar has a composite body complete with the aggressive aero bits of the Z07 package. The BBR Corvette Z06 is available in the Crystal Red Metallic Tintcoat shown above and Blade Silver Metallic, with the dark red car coming with black wheels while the silver cars come with bright silver wheels. All of the cars have dark trim on the hood, fenders, front fascia, side vents and rear end while the interior of all of these cars is finished in Adrenaline Red.

The Blade Silver Corvette Z06 is limited to just 100 units for Blade Silver and just 150 for Crystal Red, which is extremely limited for the industry. That short available leads to the MSRP of $549.95, but in hunting around the internet a bit, I found some sites advertising the Crystal Red car for as little as $370.

This seems like a great deal of money for a “toy car”, but for the serious small scale car collector or a Corvette Z06 owner with deep pockets who wants a smaller version parked on his or her desk – this piece might be one of the nicest on the market today.