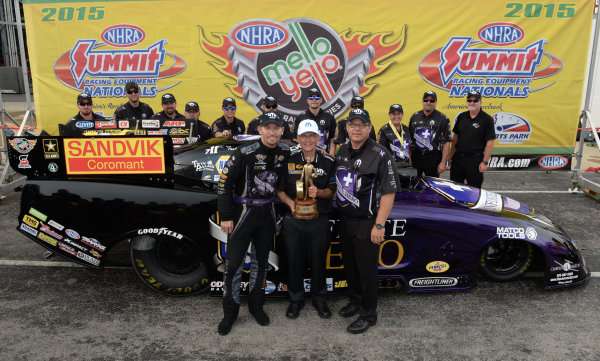 The 4th of July holiday weekend continued the amazing season for the 2015 Dodge Charger funny car NHRA teams, with Jack Beckman beating all three of the John Force Racing Camaro funny cars to get his 3rd win of the 2015 season – marking the 9th win for the new Charger body in 12 races this season.
Advertisement

The 2015 Dodge Charger funny car teams from Don Schumacher Racing have dominated the NHRA Mello Yello season in epic fashion, coming into the 4th of July weekend stop in Norwalk, Ohio. Through the first 11 races of the season, a DSR Charger won 8 of them and at least one of the team cars has been in the finals in all but one race. They haven’t won every race, but there is no question that the 2015 Dodge Chargers are the top dogs in the funny car class.

At the Summit Racing Equipment Nationals in Norwalk, Ohio, the DSR Chargers continued their domination of the class, with Jack Beckman winning his 3rd race of the season – beating all three of the John Force Racing Camaros and a Ford Mustang to take the win.

Qualifying
Team Mopar came out strong in qualifying, with Tommy Johnson Jr turning the 2nd quickest lap in the first round with Jack Beckman right behind him in the 3rd spot. Things weren’t quite as smooth for teammates Ron Capps and Matt Hagan in their first pass, but with Capps sitting 8th and Hagan 9th, all four DSR Dodge Charger funny cars were officially in the field after round 1. The 2014 Dodge Charger of John Hale turned in the 12th quickest time, putting him on the bump spot after the first round of qualifying.

In round 2, things got serious – and very fast – with Matt Hagan and his 2015 Dodge Charger turning the quickest time of the round with a track record time of 3.986 at 322.96 miles per hour. Hagan wasn’t the only quick car in round 2 of qualifying, as Cruz Pedregon’s first round qualifying time that had him at the top of the list in round 1, put him in the 9th spot after round 2. Capps, Johnson and Beckman all turned in better times in round 2, with Capps moving to 5th while Johnson dropped to 7th and Beckman dropped to 8th. John Hale went quicker in round 2, but it wasn’t enough to keep him in the field after round 2.

In round 3, many of the drivers were unable to turn quicker times than they did in round 2, but Cruz Pedregon jumped up into the 3rd spot, pushing everyone else back one spot.

In the last round of qualifying, John Hale managed to jump up into the field in the 15th spot and Tommy Johnson Jr moved up into the 5th spot. Cruz Pedregon broke into the 3 second range, falling just short of Hagan’s track record and showing that he was one of the strongest in the field…only to have Hagan come out at the end of the qualifying round and turned another track record, running a 3.973 at 322.96 miles per hour. Capps settled for an 8th place spot while Beckman started in the 11th spot.

Eliminations
In round 1, Matt Hagan and his fast-qualifier Dodge Charger destroyed the Toyota Solara of John Bojec and Jack Beckman beat John Force, but the other three Mopar drivers all lost in round 1. Capps was beaten by Courtney Force, Johnson was beaten by Alexis DeJoria and John Hale was beaten by Cruz Pedregon – making this one of the worst first rounds for the Charger teams this season.

In round 2, Matt Hagan and his Charger took on Courtney Force and her Camaro. Force grabbed the starting line advantage and drove away, knocking the fast qualifier and championship points leader out of the event. In another Charger-Camaro battle, Beckman went head to head with Robert Hight and after Hight took the lead off of the line, Beckman came charging around the Camaro on the top end to take the win.

In the other two races in the 2nd round, Tim Wilkerson’s Mustang beat Cruz Pedregon’s Toyota and in an all-Toyota battle, Del Worsham beat DeJoria. This setup a Toyota-Camaro battle for Force and Worsham on one side of the bracket and Charger-Mustang battle on the other side between Beckman and Wilkerson.

Courtney Force and her Camaro grabbed a starting line advantage and handily thrashed Del Worsham and Beckman beat Wilkerson in the same way – setting up one final battle between the new Chevrolet Camaro and the new Dodge Charger funny cars.

The Finals
Courtney Force and Jack Beckman had met 9 times before going head to head in the finals in Norwalk, and Force holds a slight 5-4 advantage – although Beckman took the win in the sole time that the two met in the finals before this past weekend.
Even though Beckman’s Charger got away from the line slightly quicker, Force’s Camaro drove around him and held the lead for the first half of the race until losing traction, at which point the 2015 Charger blasted to yet another win.

Championship Standings
With the win, Jack Beckman has moved up into the 3rd spot in the funny car championship run, with Matt Hagan in 1st place and Ron Capps in 2nd. Teammate Tommy Johnson Jr sits 6th with 6 events left until the 10-driver race to the championship begins.