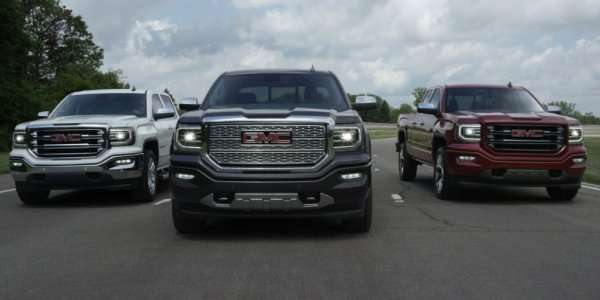 After General Motors surprised us all by introducing a refreshed 2016 Chevrolet Silverado after just two model years with the current look, the automaker has rolled out a refreshed 2016 GMC Sierra – this time showing us the new face in three different trim lines.
Advertisement

I used the word “teased” in the title because, as was the case with the first look at the 2016 Chevrolet Silverado, the full images of the 2016 GMC Sierra only show the front end, while there is also one tightly cropped image showing the new taillight design. As was also the case with the Silverado, since being introduced for the 2014 model year, the new Sierra has received some criticism for not being different enough from the previous generation. While the 2014 Sierra arguably saw more of a change from 2013 than did the Silverado, the changes for 2014 just weren’t enough for some of the loudest mouths in the truck community, so General Motors acting quick and refreshed the GMC half ton truck right along with the Chevy.

Meet the 2016 GMC Sierra
The only information included with the first pictures of the 2016 GMC Sierra explains that it gets new LED daytime running lights that wrap around the new LED headlights in a C shape. There are also new LED fog lights, new C shaped LED taillights and each trim line gets a new package-specific bumper/fascia and grille combination.

We also know that the 2016 GMC Sierra will hit dealerships in the 4th quarter of this year and more information will drop later this year.

Along with this limited information, General Motors offered up some images of the new front end designs for the 2016 Sierra in SLT (above, left), Denali (above, middle) and All Terrain (above, right) – showing the differences in the redesigned front end for each of those key trim lines.

Differences Among the Trim Lines
As you can see, the Denali and All Terrain have a molded, body colored front fascia with a contrasting lower-central section while the SLT has a large chrome bumper. All three trucks have huge, bold grille designs with the GMC logo in red, but the SLT has a horizontal bar design in chrome and the All Terrain has a similar horizontal design, except without the chrome and with body color with dark accents. The new Denali has a horizontal overall form, but this package has a chrome mesh that fills the grille openings, giving it a big, bright face.

Whether you love or hate the 2014/2015 GMC Sierra, the 2016 Sierra front end is easy to like. The GMC brand goes for the upscale approach to the Chevy trucks and SUVs, and the new face of the Sierra is clearly more upscale than the Silverado, while also having a unique look that is important in differentiating between the two half ton GM pickups.