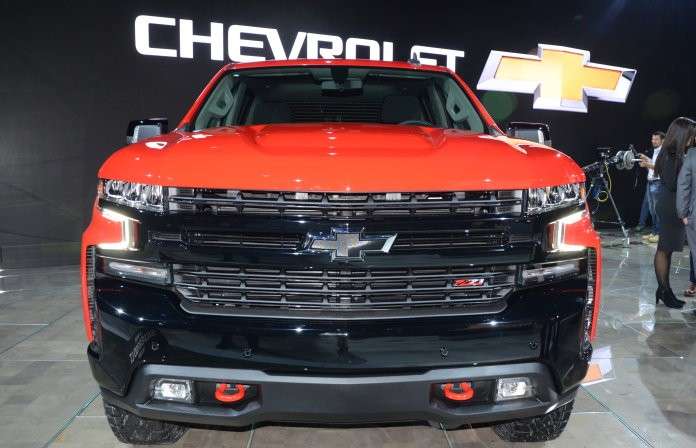 2019 Chevrolet Silverado 1500 Duramax Diesel to be Built in Michigan

The 2019 Chevrolet Silverado 1500 makes its formal debut this week at the 2018 North American International Auto Show in Detroit and while the most talked-about aspect of GM’s new pickup is the exterior design, the most important aspect might be the Michigan-build Duramax diesel engine option.
Advertisement

Back in December, Chevrolet gave us our first look at the new 2019 Silverado 1500 Trailboss at a special event celebrating the 100th anniversary of Chevy trucks. We didn’t get any real details back then, but we knew then that we would be introduced to the new Silverado in full at the 2018 North American International Auto Show in Detroit.

On Monday, the 2018 NAIAS opened to the media, introducing us to the 2019 Silverado in a few different trim levels while offering up some of the vital details on the next generation half-ton pickup. We still don’t have the full details on the new Silverado, as the company still hasn’t announced things like power numbers, fuel economy figures or pricing, but we know one key feature of the new truck – the optional 3.0L Duramax diesel.

2019 Silverado Duramax Diesel
While the engine details on the 2019 Chevrolet Silverado 1500 are limited, we know that the new trucks will carry forward the 5.3L and 6.2L V8 gasoline engines from the current models along with adding a Duramax 3.0L inline-6 diesel. We don’t have any power figures yet, but we can expect that this small Duramax will offer the best fuel economy ratings in the lineup while also offering impressive working capabilities. It might not be the strongest Silverado engine in terms of towing and hauling, but it should be one of the strongest engines in the new Chevy half-ton. More importantly, it should offer similar figures to the diesel engines offered in the Ford F150 and the Ram 1500.

Made in Michigan
GM announced yesterday that the 3.0L inline-6 Duramax diesel offered in the 2019 Chevrolet Silverado will be built at the company’s Flint Engine Operations facility in Michigan. Back in 2015, GM announced an investment of $263 million dollars to build a new engine line, and it appears as though the 2019 Silverado 1500 Duramax is that engine.

“The next-generation Silverado builds on the success of our current models, many of which are produced here in Flint. We are proud to expand the industry-leading diesel portfolio here in Vehicle City,” said John Urbanic, Flint Engine Operations plant manager.