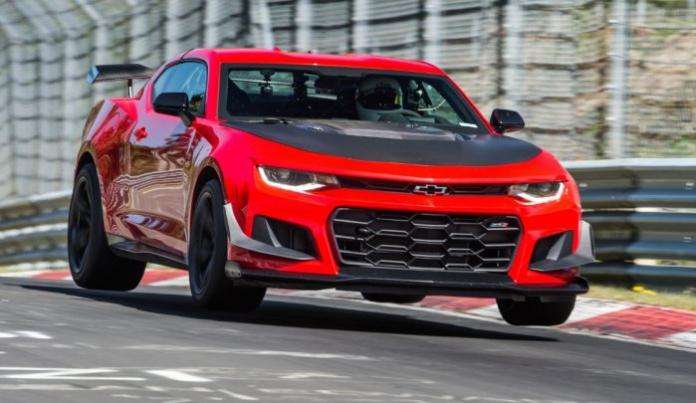 Yesterday we talked about the teaser video showing the 2018 Chevrolet Camaro ZL1 1LE and today, we have the full video and the stunning record time of just 7:16.04 – making it the fastest muscle car to lap “The Ring” and the second fastest American car to turn in an official Nürburgring record time.
Advertisement

When the 2018 Chevrolet Camaro ZL1 1LE was introduced earlier this year, it was immediately expected that the 1LE version would get around the famed Nürburgring Nordschleife. The “normal” ZL1 set the American muscle car record with a time of 7:29.60 in October of 2016 and since then, it has been speculated that the ZL1 1LE would eclipse that time by at least 4-5 seconds.

It turns out that those estimates were way off, as the 2018 Camaro ZL1 1LE has beaten the ZL1 by a whopping 13.56 seconds and in doing so, it has set the record for the best time by an American muscle car but more impressively – the Camaro ZL1 1LE has turned in the second fastest American car at the Ring ever. In fact, the Chevrolet Corvette hasn’t turned in an official lap time better than the new ZL1 1LE.

“With chassis adjustability unlike any vehicle in its peer group, the Camaro ZL1 1LE challenges supercars from around the world regardless of cost, configuration or propulsion system,” said Al Oppenheiser, Camaro chief engineer. “To make up more than a second per mile on the Nordschleife compared to the ZL1 automatic is a dramatic improvement and speaks to the 1LE’s enhanced track features.”

More impressively, that time of 7:16.04 makes the 2018 Camaro ZL1 1LE 3.59 seconds faster than the C6 Corvette ZR1, which had long held the record for the fastest General Motors vehicle to lap the Nürburgring. The only American car which has ever turned in a faster Nürburgring Nordschleife lap time is the Dodge Viper ACR, which ran a 7:12.13 lap back in 2011.

So, as expected, the 2018 Chevrolet Camaro ZL1 1LE is the quickest American muscle car to ever lap the Nürburgring Nordschleife, but what we didn’t expect was for the new Camaro to be faster than all but one American car on the list of The Ring’s best lap times.

“The harder you push the Camaro ZL1 1LE, the more it rewards you on the track,” said Bill Wise, Camaro ride and handling engineer and the driver of the hot lap. “It offers total control, with the confidence that it will deliver lap after lap.”

The video below shows the record run in high resolution, so crank up your speakers and enjoy 7 minutes of the Camaro ZL1 1LE dominating the world’s toughest road course.