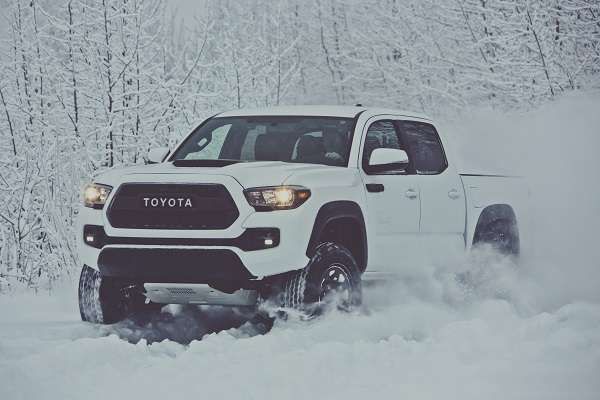 Toyota has grown their TRD PRO lineup at the 2016 Chicago Auto Show, with the 2017 Tacoma joining the Tundra and 4Runner in offering a rugged off-road package – one which is even more capable than the current Tacoma TRD Off-Road.
Advertisement

When the new Toyota Tacoma hit the market for 2016, the company included a pair of Toyota Racing Development (TRD) packages for the bestselling midsized pickup with the TRD Sport and TRD Off-Road packages. I have had the pleasure of testing a Tacoma TRD Off-Road in a variety of situations and it is a great truck, but it doesn’t pack quite the same level of performance as the Tundra TRD PRO. Obviously, this new Tacoma TRD PRO fixes that problem, introducing a collection of features that will almost surely make this the most capable midsized truck sold in America.

Upgrades begin on the outside, where the Tacoma TRD PRO gets 16 inch black alloy wheels wrapped in Goodyear Wrangler All-Terrain Kevlar-reinforced tires, an aluminum front skid plate, LED fog lights, projection headlights in black bezels, LED daytime running lights, black tail light bezels, unique TRD PRO badging in black and all sorts of other black trim pieces – from the unique grille and the hood scoop to the wheel opening flares. Buyers can pick three colors – Cement, Barcelona Red Metallic and Super White. Sadly, the stunning Inferno orange from the Tundra TRD PRO is not available on the Tacoma TRD PRO, but the truck still looks great in the available colors.

On the inside, the 2017 Tacoma TRD PRO sports heated, leather front seats with the TRD PRO logo on the headrest and power adjustments, and Entune premium audio system with navigation, a TRD shift known, a TRD floormats, a leather wrapped steering wheel with Bluetooth controls, rear parking assist and a new 4.2 inch driver information screen in gauge cluster with an “inclinometer” and a tilt gauge – both of which inform the driver to the drive angle of the truck.

Tacoma TRD PRO Performance
The 2017 Tacoma TRD PRO looks great but more importantly, this package gets a host of performance features which overshadow the appearance upgrades inside and out.

First, a set of Fox 2.5 internal bypass shocks tuned by TRD are paired with TRD front springs and a full rear TRD suspension setup with progressive rate leaf springs – all of which work together to offer an extra inch of ground clearance and all of the damping magic that you need to get the new Tacoma in and out of the toughest off-road conditions. This package also includes Toyota’s 4WDemand four -wheel drive system with an electronic transfer case and an automatic limited slip differential, the V6 tow package with a class 4 hitch receiver and both 4- and 7-pin harness plugs, an engine oil cooler, a power steering cooler, a 130 amp alternator and an electronic locking rear differential. Also, like the TRD Off-Road, the PRO package includes the Crawl Control system (automatic transmission only) and the 5-mode multi-terrain select system.

Toyota hasn’t announced the pricing for the new Tacoma TRD PRO package, but with the TRD Off-Road on which it is based starting around $31k, we should expect the PRO package to be a couple thousand dollars more – possibly starting in the $35k range when it arrives later this year.