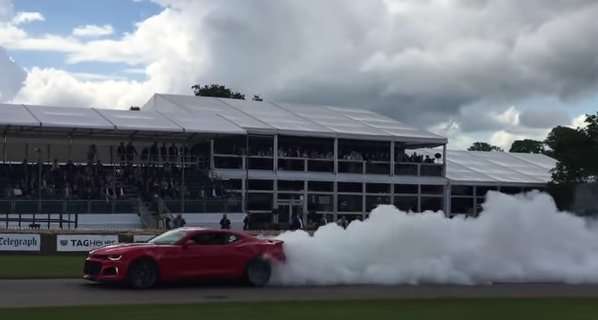 The 2017 Chevrolet Camaro ZL1 made a stop at this weekend’s Goodwood Festival of Speed and while doing so, General Motors used the European motorsports crowd to show off the new line lock feature – which makes doing a burnout even easier than it already is with the 640 horsepower V8.
Advertisement

Prior to making a quarter mile drag strip run in the 2017 Chevrolet Camaro ZL1, the driver will likely want to smoke the tires in order to make sure that the tires are clean and that the rubber is warm, sticky and ready to offer the best traction possible. The problem is that for some people – especially those with a manual transmission – doing a good burnout can be a bit tricky. The new Camaro ZL1 makes it a little easier with a new line lock feature that helps keep the supercharged muscle car in place while the rear tires are roasting.

To introduce this feature, General Motors boss Mark Reuss did a big, nasty burnout in front of the Goodwood Festival of Speed crowd.

2017 Camaro ZL1 Line Lock
Before getting into how the line lock system works in the 2017 Chevrolet Camaro ZL1, a quick explanation of line lock for someone who might not be familiar with the system.

In the 2017 Chevrolet Camaro ZL1, the line lock system is activated via the driver information system when the car is in Track mode and the Launch Control page has been chosen – while the transmission is in D for automatic models or 1st gear for manual transmission models. When line lock is activated, the information screen in the gauge cluster prompts the driver to apply the brakes and when 80% pedal pressure is reached, line lock is activated. After that, he or she can let off of the brakes, using their left foot to operate the clutch (when applicable) while the right foot operates the throttle.

The Camaro ZL1 line lock will keep the front brakes locked for 15 seconds, but if the driver pushes both center control buttons on the steering wheel, the front brakes will release and let the car roll forward, all with the rear tires ablaze.

The video below shows a 2017 Camaro ZL1 at the Goodwood Festival of Speed with Mark Reuss at the wheel. He shows off the line lock system with a short, smokey burnout while stationary and then he lets the car roll – with the tires smoking hard as the 640hp Chevy muscle car speeds away.