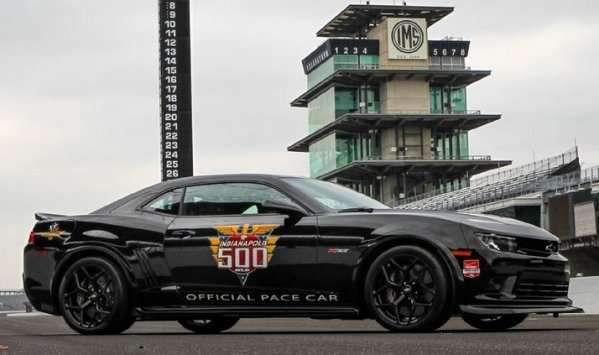 When the rumor surfaced that the 2016 Chevrolet Camaro would debut in mid-May, I had speculated that it could debut as the 2015 Indy 500 Pace Car and even though we know that the mid-May debut is actually a standalone event in Detroit, I still think that the 6th gen Camaro could lead the Indy 500 field.
Advertisement

A few months back, a rumor surfaced insisting that the 2016 Chevrolet Camaro would debut in mid-May. There are no auto shows in mid-May, so if the rumor was true, the 6th gen Camaro would have to either debut at a standalone event of its own or at some other automotive event. The only major automotive event that would be worthy of something like the debut of the next generation General Motors muscle car is the Indy 500, so we guessed that the new Camaro could either debut at the front of the Indy 500 field or at its own event.

We know now that the 2016 Camaro will debut on May 16th at the unique event on Detroit’s Belle Isle, but I believe that there is still a very good chance that the 6th gen Camaro will lead the field at the Indy 500 on May 24th. Of course, it won’t be the debut of the car, but coming just 8 days after the world premiere of the new muscle car, serving as the Indy 500 Pace Car could put the new Camaro in front of millions of eyes around the world.

Long History of Camaro Pace Cars
When the 2015 Camaro Z/28 became the Official Pace Car of the 2014 Indy 500, it was the 8th time that the muscle car had led the field since it first appeared on the track back in 1967. Chevrolet cars have been the Indy 500 Pace Car each of the past 13 years and to find a non-General Motors Indy Pace Car, you have to go all of the way back to 1996, when the Dodge Viper led the field. Seeing the next generation Camaro at the front of the 2015 Indy 500 would certainly make sense, as there are few other events that get as much attention around the world.

It should be noted that the Indy 500 likes using the Corvette for a Pace Car as much as they do the Camaro, with the Corvette serving as the Official Pace Car 12 times dating back to 1978. With 2015 being the first model year for the 2015 Corvette Z06 – which is billed by GM as the most track capable Corvette of all time – there is also a chance that the 650hp supercar could be the 2015 Pace Car. However, with the Corvette selling like hot cakes and the muscle car sales race getting so tight, it would make far more sense for the next gen Camaro to lead the field at the 2015 Indy 500.

speedzzter wrote on May 1, 2015 - 6:02pm Permalink
Indy is but a pale, fading shadow of its former self. A '16 Camaro pace car would make all the ripples as a pebble in the ocean. Bob Lutz is right . . . GM is throwing away its money on irrelevant stuff like Indy.