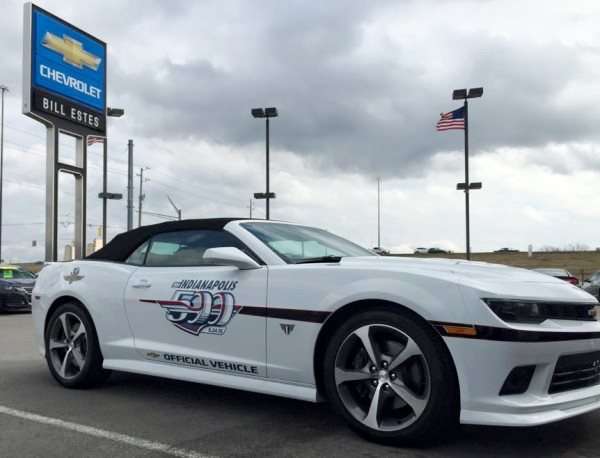 The 2015 Chevrolet Camaro SS Convertible will serve as the official Festival Car of the 99th running of the Indy 500 and for the first time ever, a small collection of those specially equipped Camaros will head straight to area Chevy dealers – with the first examples already at Bill Estes Chevrolet.
Advertisement

While the 2016 Chevrolet Camaro has not been announced as the official pace car for the 2015 Indianapolis 500, the 2015 Camaro Convertible is the official Festival Car for the fabled American race. Festival Cars are used by race officials, track officials and other VIPs around the Indianapolis area, serving to promote the race in the weeks leading up to the event. These cars generally end up on dealership lots where Camaro lovers can buy these gently used muscle cars, but for the first time, Chevrolet will sell 50 brand new examples of the 2015 Camaro Festival cars.

These cars will look like the official use Festival Cars, but the extra 50 2015 Camaro convertibles will reach dealerships without the added miles of the cars being used by race VIPs. The 50 official use cars will eventually make their way into private hands, but for those prospective Camaro buyers who want a brand new 2015 Indy 500 Festival Car, that chance is coming. As part of the Festival Car package, these 50 unique 2015 Camaro convertibles sport a Chevrolet Accessories ground effects package, a red engine cover, a unique Indy 500 themed decal package on the outside and some unique Indy 500 logos around the black and red, leather clad interior. The interior also comes with the components of the 2SS package, including the auxiliary gauge pack and the high tech touchscreen infotainment system. There is no price for these 50 brand new Camaro Festival Cars, but when you consider the fact that the 2015 Camaro 2SS Commemorative Edition Convertible with the automatic transmission has an MSRP around $47,000, I would expect these super limited edition Indy 500 Camaros to carry a price north of $50,000.

Buy Them New or Used
Over the past 50 or so years, the Indy 500 has had these Festival Cars to promote the race in the Indianapolis area and the 2015 Camaro Festival Car will do the same thing. As was the case in the past, 50 examples of this custom Camaro have been built and delivered to the Indianapolis Motor Speedway for use by race officials and VIPs. After the race on May 24th, these 50 cars will make their way to local dealerships where they will be sold as “gently used” – which has happened for years now. However, 2015 marks the first time that 50 examples of the Festival Car will be built and shipped directly to dealerships, where they will be sold as new. A total of 100 vehicles will be built and they will all have unique VIN numbers to indicate their limited edition nature. For some buyers, this new program will present the option of owning a brand new Camaro Festival Car while those looking to save a few bucks and have an “official use” Festival Car can wait until later this summer, when the used cars hit Indy area dealers.

A Special Thanks to Judie Scott and Bill Estes Chevrolet for the information and images!

Ronald Dambrosio wrote on November 30, 2016 - 10:53am Permalink
Looking to sell my 2002 35 th anniversary Red and black Camaro Selling price is $19.000 But will negotiate. If intrested please email me. I can send pictures car is beautiful! If your not intrested please inform me where I can sell...thank you and God bless you
Norman W James wrote on April 5, 2021 - 3:15pm Permalink
name: Norman W James email: [email protected] I have 2015 Camaro Indy Official Event Car Number 91 0f 100 I need to replace the decals or stripe in the following areas Left Front Fender Right Front Fender and Front Facia Do you have these if so what are the parts numbers and cost shipped to zip code 12019 Thanks Norm Ballston Lake NY 518-248-4401