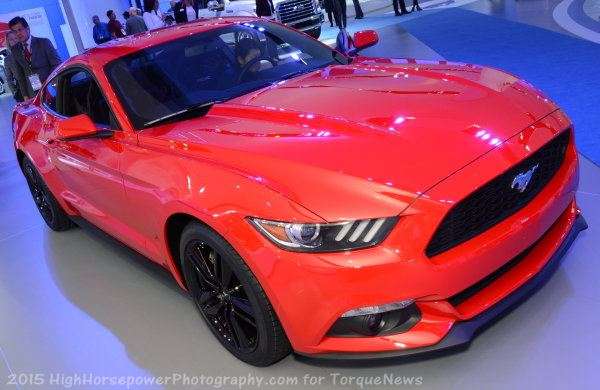 2015 Ford Mustang Gets an Even Bigger Price in the UK

Back in December, we talked about the European pricing for the 2015 Ford Mustang and while that pricing applied specifically to the German market, it looks as though new Mustang buyers in the UK will be paying an even bigger price to rule the road in the newest American muscle car.
Advertisement

In December, we brought you the news that the 2015 Ford Mustang in Germany and other parts of Europe would have an MSRP starting at €34,000 – or about $41,413 based on the Euro the US dollar exchange rate back in late 2014. Since then, the exchange rate between the Euro and the dollar, so that €34,000 price tag only equates to around $38,627 American dollars. Still, the new Mustang in Germany comes with a pretty substantial upcharge compared to the $25,300 base price in the US, but 2015 Mustang buyers in the United Kingdom will be paying an even better price than the folks across the European continent.

2015 Ford Mustang British Pricing
The 2015 Ford Mustang in the British market is offered in two trims – which Americans know as the Mustang EcoBoost and the Mustang GT. Like other foreign markets, the American base model V6 Mustang will not be offered in the UK, making the EcoBoost the British base model for the American muscle car. Getting your hands on a 2015 Mustang EcoBoost in the UK will cost you at least 28,995 GBP, which translates to $44,705 USD and 39,348 Euros based on the current exchange rates.

That same Mustang costs $25,300 in the US and 34,000 Euros in Germany, so British buyers are paying over $18,000 more than American buyers and almost 5,400 Euros more than German buyers. This is a big price hike, but when you consider the fact that the Mustang EcoBoost costs roughly $67,000 in China – paying the equivalent of $44k US dollars doesn’t seem quite so bad.

For those British shoppers looking to buy the 2015 Ford Mustang GT, 32,995 GBP is the base price translates to $50,869 USD and 44,777 Euros. That same Mustang GT with the 5.0L V8 starts at $32,300 in the US and €39,000 in Germany, the UK Mustang GT buyers are paying a similar $18k upcharge to those folks buying the EcoBoost package, based on what American buyers pay for the same car in the domestic market. UK Mustang GT buyers are also paying about 4,700 Euros more than German buyers, but they are still paying far, far less for the V8 model than Chinese buyers, who are shelling out more than $128k USD for the most powerful 2015 Mustang in that market.

So, while British buyers are paying more for the 2015 Ford Mustang than German buyers, at least they are paying way less than those folks in China.

Mustang VS Camaro in the UK
While the 2015 Ford Mustang costs more in the UK than it does in Germany or some other European markets, it is still far less expensive than the Chevrolet Camaro in the UK. The Camaro is only offered in Great Britain as what Americans know as the Camaro SS, with the 6.2L V8. The Mustang’s entry level EcoBoost model gives Ford a huge advantage with those buyers focusing on a low price, but even among the V8 models, the Mustang is much less expensive.

As is the case in Germany, this price differential between the Mustang GT and the Camaro V8 – combined with the low entry price of the Mustang EcoBoost – should help the Mustang become the bestselling American muscle car in the world for the 2015 calendar year.

Click either of the links before for a closer look at the 2015 Mustang pricing in China and Germany.
More on Chinese Mustang Pricing
More on German Mustang Pricing

Gary Bolton wrote on February 20, 2015 - 1:00pm Permalink
This article completely fails to mention that the 2015 mustang comes as standard in the UK with the premium trim and performance package, therefore making the equivalent US mustang price $32120 for the ecoboost and $39620 for the GT. That represents a $12K increase for the ecoboost and $10k for the GT. Not the massive $19.5k and $18K this website suggests. I know this is still a huge increase however the writer should have researched the facts before posting this article.
Nick Jenkins wrote on February 28, 2015 - 6:10am Permalink
I agree with Gary - bit of poor research here! The user also fails to appreciate the costings of shipping for the UK market. Are we to think that we are getting a bad deal or could it be that actually at £5000ish difference we're getting a rather good shipping deal. Try and ship any car out of the US and pay less than this!
Ben wrote on April 29, 2015 - 2:41am Permalink
Lets also not forget that European pricing includes tax, delivery, registration and emissions tax in the sticker price. Cars sold in the USA only show the price of the car and nothing else. If you strip all that away, we're only paying a base price of $37,500, which is around $2100 less than the equivalent model in the USA. We're getting a phenomenal deal, and importing a 'stang from the USA would cost more than just buying one at home.