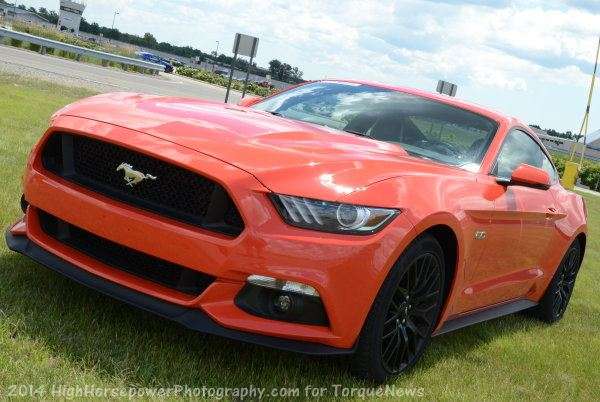 Ford Motor Company has announced the prices for the 2015 Ford Mustang in Europe and as we could have guessed, owning a new Mustang overseas will cost quite a bit more than it would here in the US – hitting European buyers with the same “foreign sports car upcharge” that Americans often deal with when buying cars built across the pond.
Advertisement

The 2015 Ford Mustang is the first ever from the Motor Company that was designed to be marketed around the world and as the first large batches of the next generation pony cars have reached American buyers – the arrival of the 2015 Mustang in overseas dealerships is drawing near. The clearest sign of the 2015 Mustang’s pending arrival in Europe is the issuance of official pricing for the sporty Ford and as we could have expected, the new Mustang costs significantly more in Europe than it does here in the US.

2015 Ford Mustang European Pricing
the 2015 Ford Mustang is available in two forms for the European market – EcoBoost and GT. The entry level V6 models from the US market will not be sold outsold of the domestic market, so for overseas markets, the EcoBoost is the base model Mustang…which is a good problem to have.

The 2015 Ford Mustang EcoBoost Fastback with the 6-speed manual transmission in Europe carries a starting price of €34,000, which based on current exchange rates translates to $41,413 US dollars. Compare that price to the $25,300 price in the US and Europeans are facing a $16,113 upcharge for the 310 horsepower turbocharged EcoBoost Mustang.

As is the case here in the US, the European 2015 Ford Mustang GT Fastback (manual transmission) price jumps up from the EcoBoost models and with a price of €39,000, the 5,000 Euro upcharge for the high powered V8 translates to a final price in US dollars of $47,502. The least expensive 2015 Mustang GT here in the US market starts at $32,300, so the $15,202 hike for European buyers of the V8 model is actually a bit less than the upcharge for the Mustang EcoBoost.

2015 Mustang VS the Competition
The biggest competitor for the 2015 Ford Mustang in Europe is the same key competitor in the local market and that is, of course, the Chevrolet Camaro. The Camaro is only offered in Europe as what Americans know as the Camaro SS and for a European buyer to pick up a 2015 Camaro, he or she will pay €39,990 ($48708 USD) for the hardtop model with the 6.2L V8 and the 6-speed manual transmission. With the 2015 Ford Mustang GT starting at €39,000, the V8 Mustang is €990 ($1,206 USD) less expensive than the V8 Camaro. More importantly, those European buyers who are concerned less with performance and more with efficiency can opt for the Mustang EcoBoost, which is €5,990 ($7,296) less than the only available Camaro in Europe.

As for comparing an affordable European sports car to the 2015 Ford Mustang, we can use the Porsche Boxster. The Boxster carries a starting price of €50,000, so even a heavily loaded 2015 Ford Mustang GT Convertible with the automatic transmission (base price of €45,000) costs less than the least expensive Porsche.

Wendell Prins wrote on December 30, 2014 - 11:18pm Permalink
Great car....in australia dealer returned my pre order deposit ..after 10months....claiming they might be changing brands....has upset a few customers!!! ifind it hard to believe that Ford is prepared to loose buiseness like this....The dealers seem to be playing cat & mouse with the price too...Its due here , we believe around Aug/sept....but still no pricing....Dealers claim 13, ooo inquiries. ?...Ive been a strongFord man since a kld...but iam definitely not happy, Hope Ford is fair Keeps the price FAIR TO THEIR FOLLOWERS...IVE BEEN DRIVING FAST FORDS 4 OVER 40 YEARS.
terry i. wrote on December 31, 2014 - 2:09am Permalink
nice but maybe a better name would be Nuclear FUSION as it has the Fusion front and looks like they stole a Porsche Caymen/911 roof line
Ghost666 wrote on January 27, 2015 - 4:14pm Permalink
Don't forget, in Europe the tax is already included. ;)
Rich wrote on March 29, 2015 - 7:06am Permalink
The European/UK variants of the Mustang 2.3 and 5.0 will also come with more equipment as standard than the US cars, so a fairer comparison would be to compare European prices with the US cars optioned the same as the European/ UK variants? The UK cars base price is also 'on the road' and includes 20% 'value added tax', as well as a one off £1k emissions tax for the first year, I think. So, Fords UK pricing is actually not uncompetitive, it's just that it will be subject to heavy EU/UK tax - as usual! So, comparison of similarly specced EU/ US cars with US sales tax etc also included would probably provide the forest cost comparison.