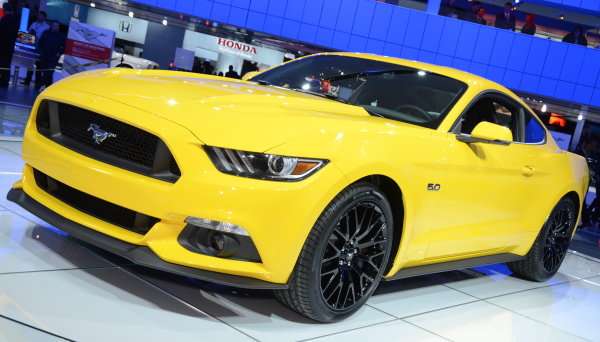 Mustang fans in the Chinese market will soon have their first chance to walk into a Ford dealership and drive out in a pony car designed with their market in mind, as the 2015 Mustang officially goes on sale in China on January 20th – but owning a 2015 Mustang in China will come with a massive price tag.
Advertisement

The Ford Mustang is a popular model in China, but it has only ever been available via the grey market. This means that Chinese Ford Motor Company dealerships have not sold the Mustang, but the car was approved by the Chinese government for road use so prospective buyers could go through an importer and have a Mustang shipped into the country. This is a fairly common practice around the world, but it comes with a serious price tag, since there are a great many fees that come with the process of buying a car that isn’t sold in your home country. There is also the fact that buying a grey market Mustang isn’t as easy as just walking into a dealership and laying down money for a new car.

Fortunately, buying a Ford Mustang in China will become a whole lot easier on January 20th, when the 2015 Mustang officially goes on sale. However, the price is still one that many American buyers might consider to be mind-blowing.

The First Mustang for China
The 2015 Ford Mustang was unique in the simple fact that when the Motor Company designed it, they did so with the intention of selling it around the world. Unlike previous Mustangs which were limited to a handful of select markets outside of North America, the 2015 Mustang was designed to appeal to buyers in Europe, Australia and Asia in addition to the domestic market.

In addition to having all of the basic features that allow the 2015 Ford Mustang to comply to local laws around the world, the new Mustang even comes with a 2.3L EcoBoost engine that will serve as the base model engine in markets outside of North America. That new engine will allow those buyers who care more about the look of the Mustang to get into a more affordable and more fuel-friendly package while the 2015 Mustang GT brings the big American muscle to overseas buyers.

Chinese buyers will be able to walk into their local Ford dealerships starting on January 20th to order a 2015 Mustang in what Americans know as EcoBoost and GT form. However, Chinese buyers will be paying what seems to be the biggest price tag I have seen thus far from the overseas markets.

2015 Mustang Pricing in China
It is to be expected that buying a 2015 Ford Mustang in China will cost you more than buying that same car here in the US. We have previously talked about the higher costs of the Mustang in the European markets, but Chinese buyers look to be facing the biggest price tags.

Those huge prices are due to China’s huge import tariffs and local taxes, in addition to the added costs associated with Ford shipping the 2015 Mustang from Michigan to China.

The Camaro Costs Even More
The good news for Ford is that the Chevrolet Camaro – which is also available from dealerships but only with the V6 engine – also has a huge price tag. The Camaro with the 3.6L V6 starts at 455,000 yuan or $73,237. The Mustang EcoBoost has a little less power, but a bunch more torque while also being more fuel friendly so when you factor in that 35,000 yuan difference, the 2015 Mustang should be a popular choice with those buyers willing to pay the big bucks to drive the ultimate American muscle car.