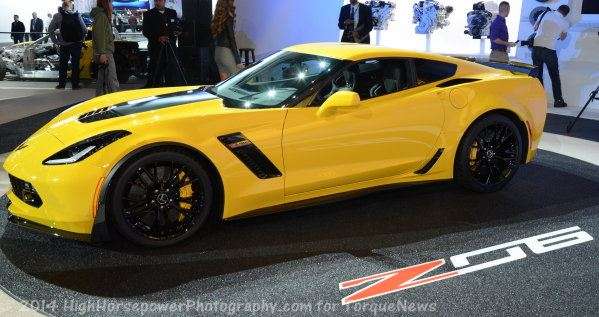 While the 2015 Chevrolet Corvette Z06 will land in the automotive history books for its breathtaking performance capabilities, the freshly announced fuel economy figures aren’t mind-blowing, but they are very impressive considering that this is the most track capable Corvette or all time.
Advertisement

Since the new C7 Chevrolet Corvette Z06 was introduced at the Detroit Auto Show, people who love the Corvette and hate the Corvette have obsessed about the specifications for this car. With General Motors marketing this C7 Z06 as the most track capable ever while the new LT4 V8 makes it the most powerful GM production car ever, it is hard not to spend time starring at pictures and dreaming about what it would be like to tear down your local roads with this beautiful beast. From the exact power output to the real world performance numbers to the MSRP, we have discussed a great many aspects of the 2015 Corvette Z06.

One aspect of the 2015 Chevrolet Corvette Z06 that we really haven’t discussed is the fuel economy because, frankly, it just doesn’t matter to the type of people buying this car. No one who is shopping for the 650 horsepower Corvette Z06 will ever say “I might buy one, but I need to know what kind of fuel economy it gets first”. However, in today’s market, fuel economy does serve as a marketing point and while MPGs aren’t as important for supercars, it is still nice to get decent fuel economy while cruising in your new Vette.

2015 Corvette Z05 Fuel Economy
According to the official EPA website FuelEconomy.gov, the 2015 Chevrolet Corvette Z06 coupe with the new 8-speed automatic transmission will offer drivers 13 miles per gallon around town, 23mpg on the highway and an average figure of 16mpg over the course of a full tank of gas. The new 8-speed transmission is a big part of these impressive fuel economy figures, but General Motors’ Active Fuel Management system that was optimized specifically for the new LT4 engine plays just as big of a role as the transmission. The Active Fuel Management system has been used on a variety of GM vehicles, but for the new Z06, it has three modes – a 4-cylinder mode with no boost, an 8-cylinder mode with no boost and a full power mode with all 8 cylinders and enough boost to make 650 horsepower and 650lb-ft of torque.

Those numbers wont set the world on fire, but they will come more as a nice bonus for 2015 Corvette Z06 owners as they have the potential to get pretty strong fuel economy when not hard into the throttle. (No fuel economy numbers have been posted for the 2015 Z06 with the manual transmission.)

Some other key competitors in the world of supercars that will compete with the new Corvette Z06 in terms of performance include the Lamborghini Aventador (11 city, 18 highway, 13 combined), the Lamborghini Huracan (14 city, 20 highway, 16 combined) and the McLaren 650S (16 city, 22 highway, 18 combined). As you can see, the Z06 is more efficient than either of the modern Lambos while the McLaren does have a slight advantage. Ultimately, there is a good chance that the Z06 will give all of those pricey supercars a run for their money so even those models which do offer better fuel economy will likely offer lesser performance.

Finally, when compared to the most powerful American production car ever – the 2015 Dodge Challenger SRT Hellcat – the Corvette Z06 has a slim advantage over the 707hp muscle car with both cars hitting the same 13mpg around town and 16mpg combined, but the Corvette gets 1mpg better on the highway.

Again, fuel economy only means so much to someone buying the 2015 Chevrolet Corvette Z06, but it is still nice to know that driving the new super Vette won’t kill you at the pump.