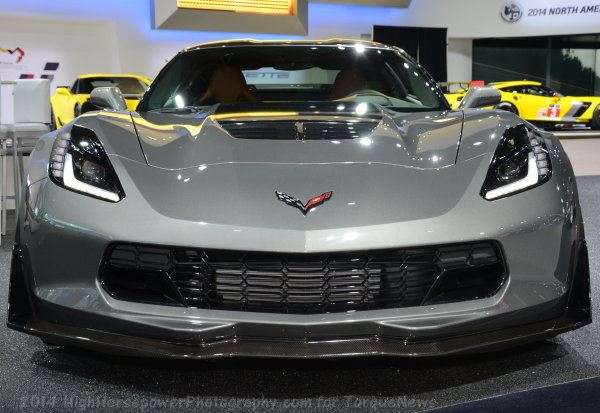 Some of the first buyers of the 2015 Chevrolet Corvette Z06 were concerned about a power loss during extended periods of high performance driving and while substantial “heat soak” was believed to be the cause of this drop in performance – that power loss is actually programmed into the ECU by GM in order to meet emission requirements and prolong the life of the engine.
Advertisement

The 2015 Chevrolet Corvette Z06 is billed as the most track capable Corvette ever so it shouldn’t come as any big surprise that within the first few weeks of ownership, new C7 Z06 owners are taking their cars to the track. Unfortunately, during extended periods of high performance driving – ranging from a few laps on the road course to repeated hard highway pulls – the 2015 Z06 is losing power. At first, owners and commenters on the various forums and social networks insisted that it was heat soak, which is a loss of power due to extremely high intake air temperatures when the supercharger itself gets very hot, but GM has refuted the heat soak concern.

The reason that GM insists that heat soak is not the cause of power loss in the 2015 Chevrolet Corvette Z06 is because the automaker knows exactly why The Big Nasty is losing power. It turns out that this power loss is actually programmed into the engine computer in order to help GM meet emission requirements while also helping to prolong the life of the engine.

In other words, General Motors has designed the 2015 Corvette Z06 drivetrain to reduce power when the engine gets hot.

Planned 2015 Corvette Z06 Power Loss
The new LT4 V8 under the hood of the 2015 Corvette Z06 is the heart of the beast, with 650 horsepower and 650lb-ft of torque making it one of the most powerful cars sold in the world. This engine meets all of the standard emission requirements and it even comes with a 10 year, 100,000 mile warranty. Unfortunately, it seems that to reach those emission requirements and to keep the engine running strong for 10 years or 100,000 miles, GM had to work some automaker magic. When the engine gets too hot, the Engine Control Unit (ECU) adjusts the timing to something that is more conservative, which is easier on the engine itself.

The reason that GM needed to do this, is that when a monster motor like the new LT4 gets very hot, the engine is more prone to detonation. Detonation can cause both increased engine emissions and excessive stress to the engine internals so to prevent the 2015 Corvette Z06 from wearing out the powerful engine too quickly, GM has set up the ECU to run a far more conservative and far less powerful tune when the engine heats up.

GM points out that this problem can be fixed by aftermarket tuning efforts, but those higher performance tuners void the engine warranty of the new Corvette Z06. The automaker seems to expect that most people who really care about racing will modify the car with no real concern for the warranty, while those folks who do wish to preserve the factory warranty will be left dealing with the lower power levels when the engine gets hot.

Needless to say, Corvette Z06 owners dealing with this issue are not happy.

A Unique Approach to Longevity for GM
The approach of pulling power when the 2015 Corvette Z06 engine gets hot is a pretty unique idea and while it might help the new super Vette meet emission targets and last longer, it is certainly ruffling some feathers in the performance world. Those defending the Z06 and GM’s decision to take this conservative tuning approach point out that the LT4 is covered by a 100,000 mile warranty. I am inclined to point out that the supercharged 6.2L Hellcat Hemi in the 2015 Dodge Charger and Challenger also has a 100,000 mile warranty. The Hellcat Hemi makes the same 650lb-ft of torque while making 57 more horsepower than the LT4 for a total of 707.

I have been to two different events with the Hellcat Hemi cars in which they were used for hours and hours of high performance driving. The Charger Hellcat was lapped on a road course for four hours with no more than a few minutes break between sessions while the Challenger Hellcat went through 3 hours of road course time with no real breaks followed by an hour of quarter mile hot lapping. At no point did the Hellcat Hemi seem to show any power loss so if the Chrysler Group can make a more powerful supercharged V8 that can make 707 horsepower for hours on end – why can’t GM tune the LT4 to make 650 horsepower for an hour of track time or repeated highway pulls?

I don’t expect this to be the last we have heard of the 2015 Corvette Z06 power pulling ECU.

WILLIAM C WAYNE wrote on December 12, 2014 - 4:19pm Permalink
The Hellcat was engineered with a HUGE cooling system, and the design goal was 20 minutes on a track in 100* weather without having to pull power. What did GM do?
Will wrote on December 13, 2014 - 6:40pm Permalink
Dodge always makes good numbers at the track but like all other dodges let's see how they are at 100k show me a viper with a 100k on the first motor
Kevin wrote on December 16, 2014 - 5:39pm Permalink
News Flash! Heat soak occurs in every engine and computers with knock sensors have been dialing out timing for over 15 years. This time of year, I doubt that heat soak is an issue. The Z06 has coolers for the coolant, engine oil, supercharger, differential, transmission and, brakes, along with strategically located vents to deal with heat soak.