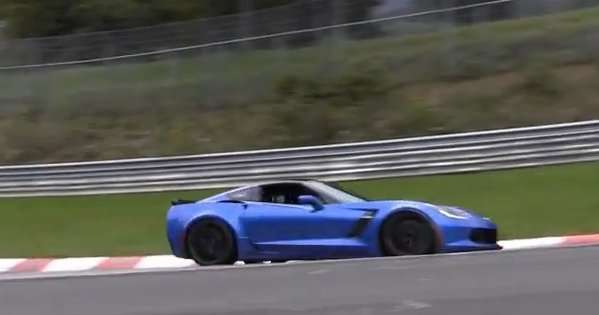 A few weeks back we brought you the news that the 2015 Chevrolet Corvette Z06 had crashed while testing on the Nürburgring, but there is good news for GM fans hoping for a new track record – the C7 Corvette Z06 is back to work on “The Ring”, this time in Laguna Blue and with the new 8-speed automatic transmission.
Advertisement

It didn’t come as any surprise that General Motors was testing the 2015 Chevrolet Corvette Z06 at the famed German Nurburgring so when video surfaced of the newest super-Vette racing around the Ring, it was something that many people had expected since the car debuted in Detroit. However, that first video of the C7 Z06 at the Nurburgring was quickly followed up by photos of that same Corvette badly wrecked on the German course, leading many to wonder if we might be waiting for a proper Ring Record run from the new Z06. Well, we didn’t have to wait long as a new video has surfaced, this time showing a Laguna Blue 2015 Corvette Z06 roaring around the legendary German track.

The Corvette on The Ring
The Chevrolet Corvette is one of the fastest cars to ever lap the famed German Nürburgring and for a quite some time, the C6 Corvette ZR1 was among the fastest production road cars to lap “The Ring” while also spending a short stint as the fastest American car on The Ring. The claim of being the fastest American car on the Nürburgring didn’t last long due to the Dodge Viper SRT10 ACR quickly posting the best lap by an American model and the old ZR1’s position on the list of the fastest production road cars quickly dropped as more ultra-high performance models have hit the market over the past few years.

Many people expect that the 2015 Chevrolet Corvette Z06 will be reassert the Corvettes place atop the list of American performance cars at the Nürburgring and with the C7 Z06 being marketed as the most track capable Corvette of all time, it should definitely be able to outrun the C6 ZR1. The C7 Z06 has more power than the old ZR1 while having a state of the art braking, chassis and suspension setup – all of which are similar to what was featured on the C6 ZR1. The only negative variable working against the new Z06 is the fact that it is also the heaviest Corvette ever, but it is still widely expected that the 2015 Z06 will turn better lap times at the Nürburgring than the old ZR1.

The Laguna Blue Z06 in Action
This newer video of the 2015 Chevrolet Corvette Z06 coupe on the Nürburgring doesn’t offer us any idea as to how quickly it is getting around the track, but it does give us a chance to hear the new LT4 engine roar while watching how smoothly the newest Corvette handles the extreme curves of the Ring. More importantly, the video below is proof for GM fans that the new Z06 is still being tested in Germany and it shouldn’t be long before we get official video from GM including official lap times.

In the meantime, crank up your speakers and enjoy the newest video of the 2015 Corvette Z06 in action on the Nürburgring.

Image above was captured from the YouTube video shown here.

Terry Holton wrote on October 31, 2014 - 6:37am Permalink
When will the right hand drive version be available?