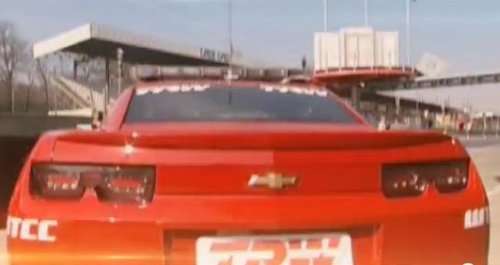 We recently took a look at the introduction of the Chevrolet Camaro SS Coupe to the World Touring Car Championship, but upon closer investigation, it appears that the Camaro used as the Safety Car overseas features some unique taillights – possibly giving us a look at the taillight design of the 2014 Chevrolet Camaro?
Advertisement

The video showcasing the Chevrolet Camaro SS Coupe as the official safety car for the 2012 World Touring Car Championship offers only a few scant glances at the rear end of the American muscle car but in those quick glimpse – there is no question that this car does not have the same taillights as the current production Camaro SS Coupe in the US.

The taillights on every production level Chevrolet Camaro sold in the US since the Camaro was reintroduced for the 2010 model year feature two separate solid red lenses on each side with the lower rear fascia cutting up between the lights on each side to punctuate the divided design.

However, the taillights shown on the WTCC Camaro safety car very clearly feature an LED design with a single lens design on each side of the rear end. The general shape of the taillights is retained with a dual-light shape but rather than a pair of individual lights, the Camaro safety car being used overseas has the taillights running together. The rear fascia still juts up into the light housing but not to the point of splitting up the two units. Also, the reverse indicators which are found in the middle of the rear bumper area in standard production Chevrolet Camaro Coupes have been removed – with the new backup lights being nestled into the taillight housings in the form of a set of white LED rings. Thanks to the wonders of LED technology, these integrated backup lights could also turn red to serve as turn signals, but that is speculation based on what we have seen on other cars around the world.

If these taillights look familiar, it is probably because they debuted at the 2011 SEMA Show in Las Vegas on the mirror-green Camaro Hot Wheels Concept. When these uniquely designed taillights debuted on that concept at SEMA, they were simply listed as “Euro-style taillamps with new inner smoked lens”. Based on this description, we could speculate that these taillights are only features intended for the European market due to some requirement or restriction that the company doesn’t have to deal with in the US. However, these shots could also be giving us our first good look at the taillights of the 2014 Chevrolet Camaro SS Coupe that will hit US dealerships within the next 10-14 months.

They could have simply chosen to go with the high tech taillights available in some European markets but in an effort to promote the Camaro around the world as a global performance car - will GM continue offering the different taillights in the European and American markets...or could GM bring these new lights to future American Camaros?

The 5th generation of the Chevrolet Camaro really hasn’t changed much since being introduced for the 2010 model year. While the Camaro has benefitted from the addition of the convertible option and the high performance Camaro ZL1 package, the exterior design of the car has gone untouched over the past three models years. With the Ford Mustang team making gradual changes year to year, Chevrolet may be looking to make some minor changes ahead of the next generation of the Camaro and some sharp LED taillights could be just what the doctor ordered. New high tech taillights could allow the 2014 (or 2015) Chevrolet Camaro to stand out a bit from the 2010-2013 models without straying from the design that has helped make the Camaro the bestselling American muscle car in the US two years in a row.

In the gallery on the above (click any thumbnails to view the whole gallery), we have included a couple shots of the Chevrolet Camaro WTCC Safety Car with the unique taillights along with a look at the standard production Camaro SS in red and the Camaro Hot Wheels Concept in green shown at SEMA 2011.

Check out the video of the WTCC Chevrolet Camaro in action below. The shots of the unique rear end come towards the end of the short video.

Ace wrote on June 20, 2012 - 3:36am Permalink
Thos tailights are actually standard on all European Camaros, I have them on mine, though I prefer the original Two-lens design better!
ForgedReality wrote on June 20, 2012 - 9:58pm Permalink
Yeah those have been on the Euro spec version for years. Why are you guys in the press business if you can't even be bothered to do the research required? Seriously. Those taillights are nothing new. This isn't some super-secret tongue-in-cheek unveiling. Didn't you also notice the huge, ugly minivan mirrors that thing has? Yeah. That's the Euro version. And since WTCC is a European competition, I would expect them to use the Euro spec Camaro, no? *massive eye roll*
RynoSS wrote on June 22, 2012 - 10:04pm Permalink
I couldn't agree with you more. How can a group claiming to be "automotive press" not do a simple Camaro5.com thread search, to just see if this something new or useful? This would be like writing a story, in 1998, on spotting a 4th Gen Camaro in Canada and reporting that Chevy is going to install huge reflectors on the rear bumpers in '99.
Camaro5 is for ... wrote on January 28, 2013 - 1:49pm Permalink
You're both assholes - typical moronic Camaro5 members. The person who wrote this said in the article that these are European taillights and he questions whether they could be used in American models in the future or if they will keep offering different tail lights for American and Euro models.
Forgedreality wrote on January 28, 2013 - 2:13pm Permalink
Wow, someone is bleeding from their vagina. Calm down. The only reason they use these style taillights in European markets is because the road legal requirements are different. It's the same reason they have to use huge mirrors off a school bus. Also, way to necro a dead thread bro. XD
Patrick Rall wrote on March 26, 2013 - 1:58pm Permalink
So, Forgedreality, looks like I hit the nail on the head with the European designed tailights? http://www.torquenews.com/106/refreshed-2014-chevrolet-camaro-ss-revealed-daytime-tv-first-official-image
danwat1234 wrote on July 17, 2012 - 1:11am Permalink
With an expensive car like this, you'd think they'd make 35w HID reverse lights standard, maybe with LED at first while the HID takes 20 seconds to reach max brightness. But no, the safety organizations won't allow this without $500 in 'leveling hardware' and other crap. Yay for modding and cheap HID kits