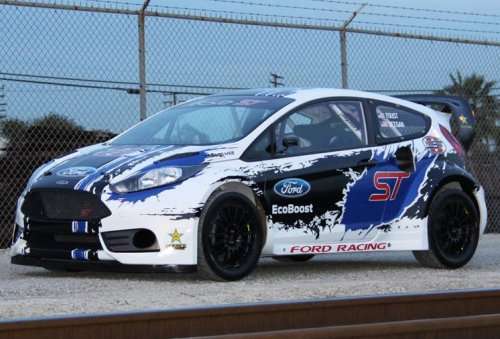 The Ford Fiesta dominated almost every race in the 2012 Global RallyCross season including a championship by driver Tanner Foust but at the 2013 Chicago Auto Show, Ford Motorsports will unveil the new 2014 Ford Fiesta ST rally car that will serve as the GRC car for Foust, Brian Deegan and Ken Block in the upcoming season.
Advertisement

The 2014 Ford Fiesta ST Global RallyCross race car is based (loosely) on the production level Fiesta ST that will hit US dealerships later this summer. While Ford drivers including Foust, Deegan, Block, Toomas Heikkinen and Marcus Gronholm all piloted Fiesta race cars for the 2012 GRC season, those cars didn’t look much like the production Fiesta hatchbacks available in the US. Sure, the Fiesta GRC cars had similar headlights and taillights along with a lower grille opening that was similar in styling to the production model but the street driven Fiesta just doesn’t offer the aggressive look that you need for a proper race car. On the other hand, the sporty form of the upcoming production 2014 Fiesta ST lends itself nicely to a Global RallyCross car so the new race car set to debut later this week has a front fascia that is very similar to the production model – with the exception of the enlarged openings and huge, flared fenders. Out back, the 2013 Global RallyCross Ford Fiesta ST departs a bit from the production model with a lower rear diffuser that is entirely blacked out where the road going model had a body colored lip that runs along the bottom of the fascia. Of course, that massive rear spoiler will also help the GRC car differ from the dealership-bound 2014 Fiesta ST.

"Global RallyCross has been a great series for us to demonstrate what Ford's small performance cars can do," said Jamie Allison, director, Ford Racing. "With great drivers and teams, and now a formal manufacturer partnership with OlsbergsMSE, Ford Racing's commitment to Global RallyCross is quickly growing. We're excited about the debut of the Fiesta ST GRC car this year, and it will be fantastic to see Ford's global performance car compete in four countries around the world this season."

Where the 2014 Ford Fiesta ST coming to dealerships will be powered by a 1.6L EcoBoost 4-cylinder mill that sends 197 horsepower and 214lb-ft of torque to the front wheels, the 2013 Global RallyCross Fiesta ST will likely be powered by the same 2.0L turbocharged 4-cylinder engine as was found under the hood of last year’s GRC car – funneling around 600 horsepower to all four wheels with the help of a race purposed all wheel drive system.

The 2014 Ford Fiesta ST Global RallyCross car on display at the Chicago Auto Show is built in cooperation with OlsbergsMSE, the team responsible for building the 2013 GRC cars for both 2012 champ Tanner Foust and 2012 runner up Brian Deegan. Andreas Eriksson, OlsbergsMSE team principal, offered the following comments on the upcoming 2013 GRC season and the new Fiesta ST race car:
"OlsbergsMSE has a good history developing extreme/RallyCross cars, and with the longer-term manufacturer relationship with Ford and its technical support, together we will develop even stronger RallyCross cars. The partnership is exactly what OlsbergsMSE needs to continue to be a winning team in the coming years. There are great teams and manufacturers coming to the series and the sport. We will have better and tougher competition, and I look forward to the challenge of staying persistent in the development of our cars. Outside of our technical development, we will also be very focused on providing our drivers with the information and input they need to be the best. This is the way our entire OlsbergsMSE program moves forward, together with Ford. To be the best in this extreme sport, hard work and dedication is required from drivers and team."

Ken Block will also be driving the 2014 Fiesta ST GRC car but his cars will be built by his Hoonigan Racing Division. "I'm stoked to be able to say I'm going to be continuing to race Fords in Global RallyCross for the next few years, especially with the four X Games events this summer," said Block. "For the upcoming 2013 season, my team is taking everything we learned during my rookie season last year and applying it to an all-new RallyCross car. It's going to be a fun season."

The 2013 Global RallyCross schedule has not yet been announced but we know that the GRC will compete in the 2013 Summer Global X Games with stops in LA, Brazil, Spain and Germany along with five other GRC events around North America that are run independently of the X Games schedule. Ford Motor Company will be the exclusive automotive sponsor of the 2013 Global X Games and based on the experience of Ford racers in 2012 – Ford will very likely be sponsoring a series dominated by their entries.

There were six events in the 2012 Global RallyCross season with stops in Charlotte, Texas, New Hampshire, Los Angeles and two in Las Vegas. Ford Fiesta’s finished first and second at Charlotte; first second and third in Texas; second and third at the X Games; third place in New Hampshire; first and second at the first Las Vegas event and first and second at the GRC Finale in Vegas. The win by Foust at the Vegas Finale allowed Tanner to tie up the championship with Ford teammate Brian Deegan grabbing the second spot in the championship standings. While the competition will be tougher in 2013, I fully expect to see Ford’s incredible roster of drivers grabbing up podium spots in the upcoming season.

Joining the 2014 Ford Fiesta ST Global RallyCross car at the Chicago Auto Show will be a production Ford Focus modified by GRC racer and gymkhana superstar Ken Block. You can read more about Block’s customized Focus ST by clicking here!